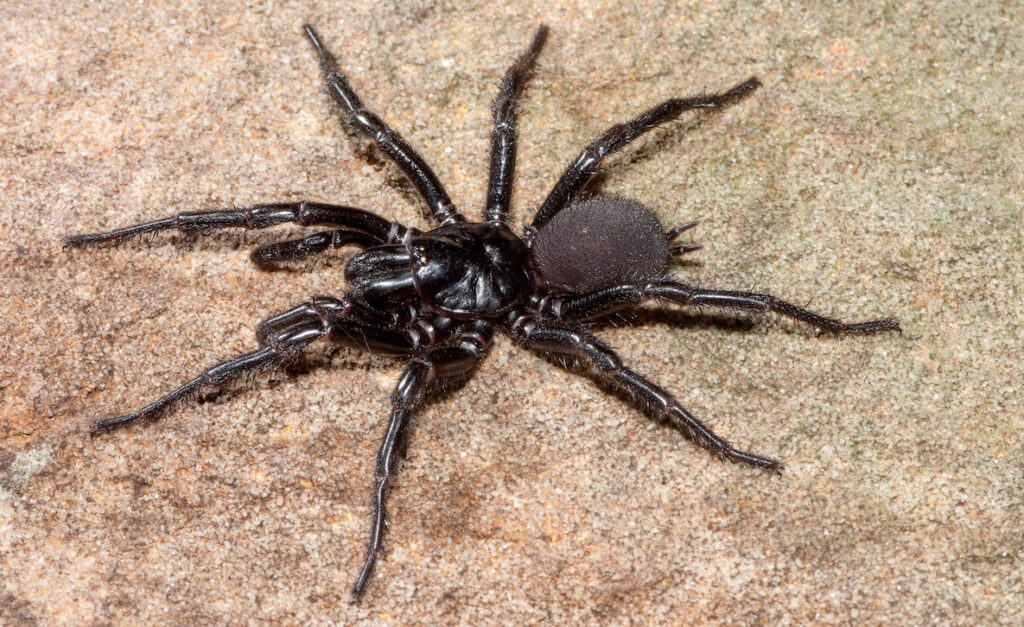 Where are funnel web spiders found?

Funnel web spiders are found along the east coast of Australia from Tasmania to north Queensland. They are found in the moister forested areas along the coast into the dividing range and in suburban areas of higher rainfall.

Funnel webs build their burrows in moist, cool, sheltered locations, such as under rocks and logs and in the cracks and crevices of rocks and cliffs. Tree dwelling funnel webs hide  in holes in trees.

There are around 40 species of funnel web spiders. They have some common characteristics:

The body length varies by species and can be anywhere between 1 – 5 cm.

The Sydney funnel-web has a body length of 35 mm, with the smaller male 25 mm. The leg span averages around 7 cm.

Funnel webs will rear up and lunge / strike when irritated.

To the untrained eye, they can be confused with mouse spiders, some species of trapdoor spiders and even the black house spider.

The funnel-web lines the burrow with silk, with a network of trip lines radiating from the entrance.

A few of the funnel web species, such as the norther tree funnel-web spider, live in trees. They live on hollows in the trees, which are lined with silk and debris (messy, no obvious funnel) and have been found as far as 30 m above the ground.

The male funnel-webs reach maturity after several years at which point they leave their burrow to look for a mate, generally in wet, humid conditions. In the case of the Sydney funnel-web, this is the most likely time when humans can come into contact.

On finding a female the male needs to carefully entice the female out of her burrow to mate, rat than become a meal.

The female produces an egg sac of 100 or so eggs which is placed within her burrow for protection. She will defend the egg sac vigorously.

The eggs hatch in around three weeks and the spiderlings will remain in the burrow for a couple of months (two moults) before leaving.

Male spiders generally die around 6 months after mating (aged around 3 years), whereas female spiders can breed for several years after reaching maternity, living to 10 years or more.

Insects form the majority of the diet of funnel web spiders, although they will catch lizards and frogs.

Funnel web spiders have a very dangerous, indeed lethal, bite! The tree dwelling funnel webs and Sydney funnel web cause most of the bites.

The male Sydney funnel web has a unique toxic component (robustoxin), which is highly active on primates (including humans) and with its habit to go wandering looking for a mate, it is the spider most likely to come into human contact (bites from females are very rare).

The level of toxicity of all the funnel web species is not known, and whilst all bites should be treated with the utmost urgency, bites from the Blue Mountains funnel web and tree funnel webs are also considered highly toxic.

The good news is that since an antivenom became available in 1981, there have been no fatalities to a funnel web bite. Obvious bite marks a couple of millimetres apart will be visible.

The funnel web is the only spider bite that should be treated with a pressure/immobilisation  bandage, much like a snake bite.

Funnel web concerns generally centre around bite avoidance rather than preventing an infestation (although if you have ideal conditions on your property, there could be a good number of nesting funnel-webs).

If you are in a known funnel-web “hotspot”, such as the Sydney north shore, ensuring doors and insect screen are well fitted will help prevent wandering males entering.  Avoid leaving shoes or clothing outside and on the floor inside, and check inside shoes before putting them on, especially during November to April when male funnel webs tend to be mobile.

Although funnel webs cannot swim, the fine hairs on their abdomen trap air if they fall into water. They can survive on the bottom of swimming pools or in filter boxes for up to 24 hours! So a “dead” spider should not be pulled from the water by hand.