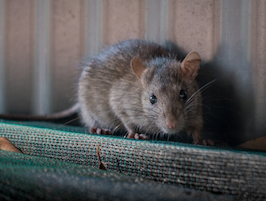 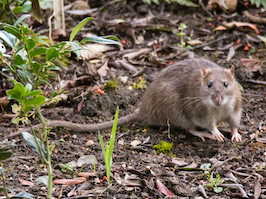 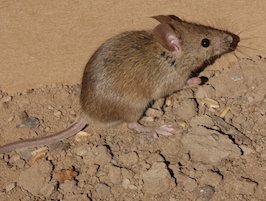 Rodents pests, including rats and mice, cause a staggering amount of damage to cereal crops each year. They attack all stages of the crop from seedling through to the stored grain.

They cause direct damage by eating the crops and grain and by spoiling stored grain with their faeces and urine.

In Asia alone, it has been estimated that the loss to rice crops each year caused by rodents could be enough to feed 200 million people.

Although the sewer rat, roof rat and house mouse are amongst the rodent pests in agricultural areas, especially in store product, they are also the major pests in urban areas.

In the urban environment, rats and mice eat and contaminate food but also cause damage to buildings and infrastructure with their gnawing ­– rodents chewing through wiring is thought to be one of the main causes for unexplained house fires.

Rodents are also known to carry a wide range of diseases, some of which have causes millions of deaths over the years, such as the bubonic plague (‘black death’).

Diseases carried by rats and mice

Rats and mice are known to carry and spread more than 35 diseases, including the plague, Salmonella, Leptospirosis and rat-bite fever.

These diseases can be spread through touching or handling live or dead rodents, receiving a rodent bite or unknowingly coming into contact with their saliva, urine or droppings in contaminated food or water.

Rodents also carry fleas and ticks which are capable of transferring a range of other dangerous diseases, including Lyme disease and murine typhus. Of course the flea is infamous in its role in transmitting the bubonic plague – the ‘black death’ – cause by the bacteria, Yersinia pestis. Rodents also carry rodent mites, which can infest houses where there is an established rodent problem.

Some people can suffer allergic reactions to rodents. This is typically a response to proteins in their dropping and urine, but this also gets transferred to their saliva and fur. Such allergic reactions will be more likely when a rodent infestation is active and in inner city areas where rodents are common.

Particular care needs to be taken when cleaning up after rodents, both in respect to disease transmission and allergic reactions.

Cleaning up after rodents

Dead rodents should be picked wearing disposal latex gloves and the rodent should be placed in a sealed plastic page, before placing in a further sealed bag before disposing in a garbage bin.

There is a specific clean-up process for rodent nests, droppings and areas where they have frequented…

Rodents are generally pretty shy, keeping out of sight and generally only coming out at night. Whilst you might not see them, you will often see their calling card… their droppings. It is relatively easy to identify rodents through their droppings.

Clicking on the individual species (above) will give you the full details about how to identify the different pest rodents.

How do pest professionals get rid of mice and rats

To deal with a rodent problem the first step is to carry out an inspection. The inspection has 3 objectives, to:

The treatment program will depend on the results of the inspection as it will influence the products chosen and the placement of any baits or traps. Baits will generally provide the quickest and most complete control of a rodent problem.

Depending on the severity of the infestation, the pest manager may require more than one visit before elimination is confirmed.

Rodent control in food handling establishments, hospitality industry, farming areas and other commercial accounts typically require a regular service program to ensure the area remains rodent free. The frequency of visits will depend on the nature of the facility and level of rodent risk.

The latest innovations in commercial rodent control centre around using remote sensors to monitor rodent activity, providing more information for accurate decision making on rodent treatments, reducing the number of site visits and for the visits that are required, making them more efficient. Examples of these rodent monitoring systems are Ratsense and iQ.

Using this technology, it can really help with the smart placement of rodent baits, to get fast, efficient rodent control.

Rodenticides are the killing agent that are used in rodent baits. Many of the current rodenticides are anti-coagulents. Our article on the history of rodenticides provides an outline as to how they have changed over the years.

Most rodent baits are suitable for use as both a rat bait and mouse bait. However, there are a whole range of different baits on the market including rodenticide wax blocks and soft rodent baits. The choice of bait often depending on the nature of the rodent problem and the foods the rodents are currently feeding on.

However, it’s often the placement of the rodent bait that determines the success of a rodent control program. This is where the expertise of a professional pest manager comes in, with their knowledge of rodent behaviour.

Safe use of rodent baits

In deciding on a rodent control program, the pest manager will carry out a risk assessment and will discuss any particular safety concerns.

There are three particular safety considerations

These factors will influence what product to use – which type of bait or indeed whether to use traps instead of baits. They can also impact the location of any bait / traps.

Pest managers should always place baits in lockable bait stations, this greatly minimises the chance of accidental poisoning and keeps the bait in the desired location.

In situations where there is a risk of injury, traps should also be placed in lockable bait stations as well.

As you can see, there is a lot more to safely eliminating a rodent problem than just buying some rat bait at the supermarket and throwing it into the roof void!

With regard to secondary poisoning, a recent study of powerful owl deaths in Melbourne, demonstrated that over 80% had detectable levels of rodenticide in their bodies with over 60% having toxic levels. The researchers suggested the likely cause was for members of the public inadvertently or intentionally poisoning possums which were subsequently eaten by the owls. Another example as to why it is a good idea to use a professional pest manager to carry out rodent control programs.

Do rodents die outside?

It’s a bit of an urban myth that rodents that are affected by bait go outside to die. Some will go outside to look for water as they get thirsty when affected by bait. However, most will die in or close to their nest. This is why it is important to try and identify the nest(s) so that the dead rodents can be removed.

Obviously with traps there is no danger of a dead rodent dying within a wall cavity.

Mouse traps may seem a bit old fashioned but they still have a role to play in rodent control programs. There is no different between mouse traps and rat traps, accept rat traps are a lot bigger!

When using mouse traps or rat traps it is necessary to fix them in place and to locate them away from any inquisitive fingers or paws! A pest professional will place the rodent traps in a lockable bait station to prevent accidental injury.

Here are some of the advantages of using rodent traps.

How to prevent a rodent infestation

Rodents come areas in and around buildings looking for food and shelter.

To prevent rodents entering buildings for shelter it’s necessary to rodent-proof your home!

Remember ants will also look to move indoors during the warmer months; during hot dry periods in search of water, or during lengthy periods of heavy rain for a dry nesting site.

How to rodent proof your home

With rats able to squeeze through a hole the size of the end of your thumb and mice holes the size of your little finger, you need to be very thorough in filling in the potential enter points

Make it difficult for rats to access the roof by pruning any branches that overhang the building.

Make the perimeter of the building less attractive for rodents to build their burrows by removing any dense vegetation or long grass.