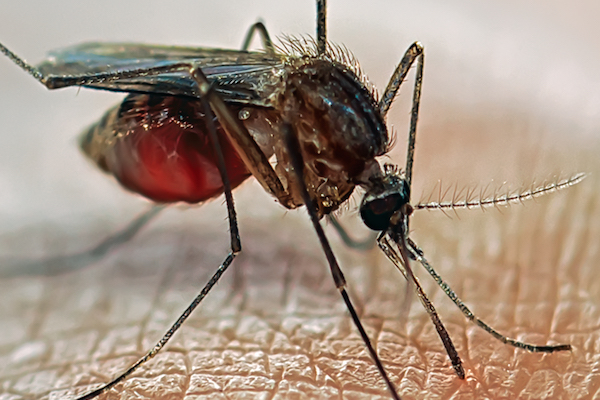 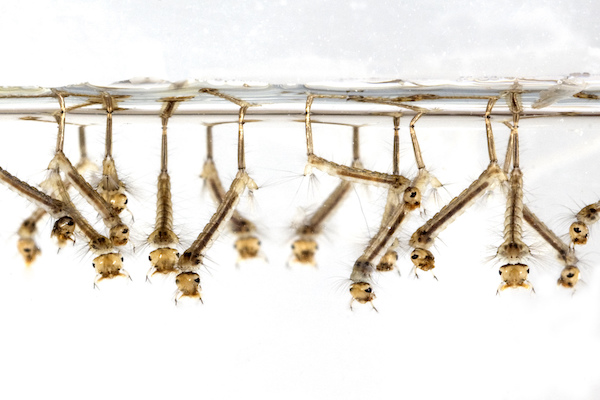 For most people in Australia, mosquitoes are an occasional annoyance… but if you have a major mosquito problem it can be a major annoyance and make outdoor entertaining impossible. In other parts of the world, this annoyance has a more significant impact – mosquitoes in the bedroom can disturb sleep patterns and everyone needs a good night’s sleep to work efficiently the next day.

However, the biggest concern with mosquitoes is the wide range of diseases that they carry and pass on to humans when they bite. Globally the diseases with the biggest impacts are malaria, dengue, yellow fever and chikungunya. Whereas mosquito borne diseases are so common in Australia there are still a range of debilitating diseases that are of concern including: Ross River fever, Barmah Forest virus, Murray Valley encephalitis and occasional outbreaks of Dengue fever.

The common banded mosquito, Culex annulirostris, is as its name suggest, common! It is a night time biter and carries a range of viral diseases. It can breed in a range of water bodies and can fly up to several kilometres from its breeding sites.

The Australian saltmarsh mosquito, Aedes vigilax, is a common mosquito in coastal areas, breeding in mangrove swamps, tidal pools and other brackish water bodies. Although it is a coastal mosquito they can fly great distances and have been found up to 50km inland. They will bite day and night, although dawn and dusk are the peak biting periods.

Aedes notoscriptus, the domestic container mosquito, is a common mosquito around homes, as they breed in containers and small bodies of water. As such, homeowners can reduce problems with this mosquito by eliminating potential breeding sites. It is a black mosquito with white stripes, so quite easy to identify. However, it does look similar to Aedes aegypti, the dengue mosquito which is found in north Queensland and the Asia tiger mosquito, Aedes albopictus.

The Asian tiger mosquito, Aedes albopictus, is not yet established in Australia, although it has been caught in mosquito traps at some seaports and airports, and is present in the Torres Strait. Although it is an occasional disease carrier, it is its biting habits that are of most concern. As you would expect from its name – “tiger” – and its common name in the US – the “BBQ stopper”, it is a voracious biter. It can bite up to 100 times an hour! Coupled with its ability to survive cooler temperatures, if it became established in Australia, it could significantly impact our outdoor lifestyle.

Mosquitoes undergo a complete metamorphosis – a complete change in body form from the larva to the adult.

Mosquito larvae (small semi-translucent worm-like) live under water and rest close to the surface as they need to breathe air. Aedes and Culex mosquitoes have a siphon which they uses as a breathing tube, Anopheles mosquitoes rest just under the water surface. They get their common name – wrigglers – from the rapid wriggling movements they make to get away from the surface to escape potential predators.

Mosquito pupae are more spherical in shape and still remain in the water. Unlike the pupa of most insects, the pupae of mosquitoes remain mobile whilst pupating, so they can escape potential predators.

Adults emerge from the pupae after only a few days and the adults live for several weeks. Female mosquitoes need a blood meal to lay eggs (the males don’t bite), and both males and females will drink nectar and plant sap.

Only the female mosquito bites as she needs a blood meal before laying eggs. Bites can get itchy as there is often an allergic reaction to the mosquito saliva… and it’s the injection of saliva to prevent clotting that allows the transfer of disease.

Malaria and dengue fever are the two mosquito borne diseases of biggest global concern. Each year there is around 220 million cases and more than 400,000 deaths from malaria, which is a parasitic infection and around 96 million cases and 40,000 deaths each year from dengue, a viral infections. The other main mosquito borne viral infections include chikungunya, Zika, yellow fever, West Nile and Japanese encephalitis.

Whereas mosquito borne diseases aren’t so common in Australia, there are still a range of debilitating diseases that are of concern, including: Ross River fever, Barmah Forest virus, Murray Valley encephalitis and occasional outbreaks of Dengue fever in the northern parts of Australia.

Many of these viral diseases in Australia have some common symptoms – fever, headaches, body aches, tiredness and stiff joints, with Japanese encephalitis also causing dizzyness, tremors and seizures and dengue fever progress to cause bleeding, vomting and diarrhoea. Japanese encephalitis and dengue fever can be life threatening. Whilst the symptoms can be treated of all these disease can be treated, there is not treatment for the virus itself. The best advice is to avoid being bitten by mosquitoes, particularly in areas where there is a known outbreak.

How to get rid of mosquitoes

As mosquitoes breed outdoors and most species can fly long distances (to can fly in to your property from surrounding areas), controlling mosquito problems outdoors can be a challenge. There are three actions for getting rid of mosquitoes outdoors:

Mosquito traps can be effective in trapping mosquitoes, but next to a very attractive human the mosquitos are still likely to prefer the human. As such, if using a mosquito trap, other actions will also be necessary.

Stopping mosquitoes coming inside is the best way to keep the inside of your home mozzie free. Well fitted insect screens and keeping doors closed will keep mosquitoes out. If you have a more open style house you will need to use mosquito zappers to repel or kill any mosquitoes present, with the option of using a bed net for a good night’s sleep.

Area mosquito repellents, as their name suggests are designed to repel (or at least prevent mosquitoes biting) from the treated area.

There are a variety of products available, all of which work on the principle of emanating a small amount of insecticide into the air. Outside the concentration in the air is very low and so tends to repel mosquitoes rather than kill them. Common products are mosquito coils or mozzie zappers.

Generally they only protect a fairly limited area and it’s important to place the device upwind, so that the insecticide is pushed into the area to be protected.

Personal insect repellents applied to the skin can be very effective mosquito protection and are great option when outside the home or walking in the bush. The proven repellents contain DEET or Picaridin and will provide several hours protection depending on the concentration and how much you are sweating. Learn more about how DEET works?

It’s important to cover all exposed areas of skin, so the combination of long trousers and long sleeved, loose fitting shirts will minimise the amount of insect repellent you need to use. Every wondered how mosquitoes locate a host?

More information on how to protect yourself from mosquitoes from Dr Cameron Webb.

How to prevent a mosquito infestation

To prevent an indoor mosquito problem you simply need to stop the mosquitoes from coming inside. Well fitted insects screens on doors and windows are a must… of course making sure you close the doors will help!

However, if you have a home without insect screens, it will be necessary to use a mosquito repellent product indoors such as a plugin mozzie zapper.

Of course if you manage to reduce the number of mosquitoes outdoors, the chances of mosquitoes finding their way in will decrease significantly.

To enjoy your outdoor eating areas, you probably need to combine efforts to reduce the number of mosquitoes present and use mosquito repellents when entertaining.

To reduce the numbers of mosquitoes on your property you should eliminate potential mosquito breeding site – any areas of standing water such as plant pots, bromeliads, puddles, blocked gutters and drains, etc. A professional mosquito treatment, where foliage and mosquito resting places are fogged or sprayed with insecticide creates a mosquito interception zone. It will kill the vast majority of mosquitoes on or entering the property when they land of these treated surfaces to rest. Mosquito treatment studies have show that these treatments can eliminate up to 90% of mosquitoes for up to 3 months.

Even after these preventative steps, in high pressure mosquito areas there will always still be the occasional mosquito, so the use of area mosquito repellents or personal insect repellents are a good idea to guarantee a mozzie free BBQ.

Check out our library for more information and articles on pest control mosquitoes.