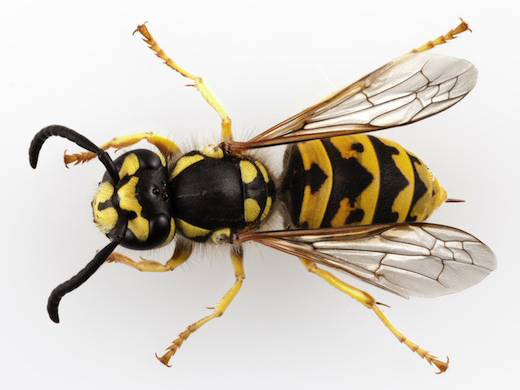 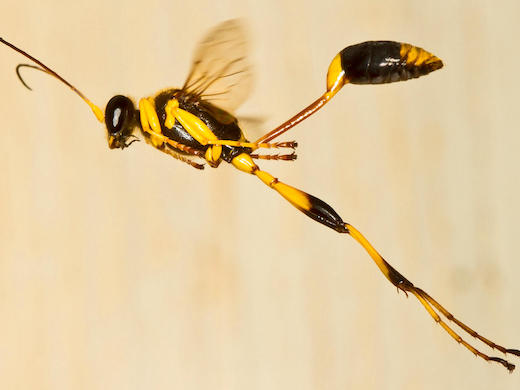 Wasps aren’t a frequent pest, but they are a high anxiety pest – no-one wants to get stung! The safety of one’s family and pets are paramount. As such eliminating nests around homes, businesses and associated gardens is important to reduce the risks of getting stung.

Most stings occur by accident – sitting on a wasp or knocking into a nest in the garden. But some wasps are more aggressive, particularly if you get close to their nest. This is particularly the case with European wasps. A number of stings from European wasps also occur when eating outside – they will often land on meat to take back to their nests and they love soft drink and can be inside drink cans and cups!

The mud dauber and potter wasps, although large and ‘scary’, generally aren’t that aggressive and don’t often sting. However, their mud nests can be unsightly and so property owners like to remove their nests and indeed prevent them being built in the first place.

European wasps can also be an issue in horticultural areas, particularly in vineyards. They are particularly partial to ripe grapes!

Although some wasps are pest, a number of wasps are considered beneficial insects. Parasitoid wasps help control an number of agricultural pests. For homeowners, a number of wasps, including mud dauber and spider wasps, hunt and kill spiders (such as huntsman spiders) for their young … so you may want to keep them around!

Wasps, being insects have three body segments, with a very obvious waist (petiole) between the thorax and abdomen. They also have two pairs of wings (flies have one pair), although the second pair are often smaller can can be hard to see.

Most of the pest wasps, certainly those of concern to humans, have aposematic colouring – bright, warning colours (e.g. yellow and black) – which gives you the hint they may be dangerous!

Wasps also have large compound eyes (as they are visual predators) and large visible mandibles for biting and cutting (although they have internal mouth parts for sucking).

Differentiating between the difference species requires observing their shape and colouring. Some of the body colours, especially the stripes, can be variable within species, so it’s also important to look at the colour of the wings, antennae and legs. Antennae length can also be a distinguishing feature.

There are a variety of Australian paper wasp species including the Polistes and Ropalidia genera.

Mud dauber wasps (which build mud nests), along with spider wasps hunt spiders, which they paralyse and store as food to feed their young.

Resin potter wasps are a different group of potter wasps using the sap from plants (as opposed to mud) to build their nests.

Blue ants are not ants at all but solitary, wingless, ground dwelling wasps.

European Wasps are a major invasive pest in Australian, having established themselves from mid NSW down to Tasmania.

Murder hornets have been in the news a lot in the US, and look like a very large wasp. Currently they are not in Australia.

If you are able to locate the wasp nest, the location, shape and structure of the nest can also be very useful in identification.

Wasps go through a complete metamorphosis, from egg to larva (grub), pupa and adult. Most wasps are solitary, but the pest wasps are eusocial wasps, which means they have a queen supported by non-reproductive workers to form a nest. The workers forage for food and care for the young, which are housed in individual cells. Towards the end of the summer when the nests are at their largest, the nests products new queens and kings, which then fly off to mate. The new queens will generally hibernate over winter and emerge in spring to start building a new nest. In Australia, where the winters are relatively warm, European wasp nests don’t die off over winter and can continue to grow year on year!

For mud dauber and potter wasps, the developing wasps generally remain in the pupal stage in the nest over winter, emerging in the spring.

The different wasp species often construct different types of nests and can be used to identify the species.

Paper wasps make their nests by chewing up wood and plant material, and mixing it with saliva. They then use this paper paste to construct the nest. Typically the nest is made up of a series of individual cells into which the queen lays and egg and the larva grows and pupates. The adult wasps rest on the outside of the nest.

For Australian paper wasps, the nest is generally hung upside down from a sheltered location (eg, under eaves of buildings or branches of trees), often from a single attachment point. The shape of the nest can vary by species.

For European wasps, around 80% of nests are actually located underground, often in raised banks which are protected from flooding. The other 20% of nests will be located in or on buildings or trees. These nests will have a similar internal structure to the Australian paper wasps, but as the nest grows they also construct an outer protective sheet of paper, leaving a single entrance to the nest inside.

The Ropalidia species of Australian paper was build a variety of different nest structures.

Mud dauber and potter wasps are solitary wasps. The female wasp buildings individual cells made of mud, into which she lays a single egg. She will then collect prey which she pushes into each cell to provide food for the larva. The shape and structure of these nests can also be used to identify the species – generally speaking mud dauber wasps tend to have a messy nest with mud coating the outside of the individual cells, potter wasps create well formed individual cells which remain visible (but this is not always the case). Their nests tend to be located in sheltered positions such as the eaves of buildings or in garages and out-houses.

What do wasps eat?

The adults of the pest species of wasps generally eat sugary foods themselves, normally plant nectar, for energy. (European wasps rather like soft drinks too!).

However, the growing larvae need protein for growth. As such the foraging wasps collect prey, generally other insects to feed their young. (European wasps will happily take meat from a BBQ!).

Mud dauber wasps capture spiders for their young and potter wasps target caterpillars. In both cases their stings only paralyze the prey so they can take it back to the nest. It ensures the prey remains fresh for when the larvae is ready to eat it!

How to get rid of wasps?

Killing individual wasps using a fly spray is generally quite straight forward, but make sure you keep your distance after spraying as they can get quite angry!

If you have a wasp nest on your property, it is important to take safety precautions before dealing with it. Wearing safety gear is a must – there a plenty of cases of homeowners getting stung or falling off ladders in their rush to escape! Although there is the option of using some wasp aerosols, which have a long range jet, many homeowners decide it’s better to use a professional pest manager to get rid of the wasp nest safely. This is especially the case for European wasp nests as their protective outside layer or their location in the ground generally means you need specialist equipment and products to get rid of the nest.

Sometimes you may have a wasp problem but the nest is not on your property. The use of wasp traps can be useful to keep the wasp numbers down, but of course that doesn’t kill the nest. However, professional pest managers have access to wasp baits, which foraging wasps will take back to the nest, eliminating the nest wherever it may be.

Check out our magazine articles for more in-depth information on pest control wasps.