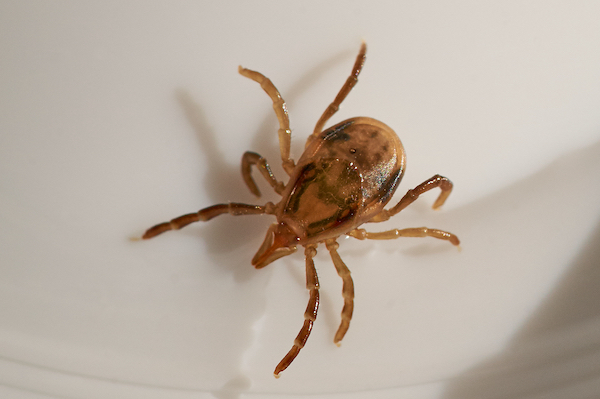 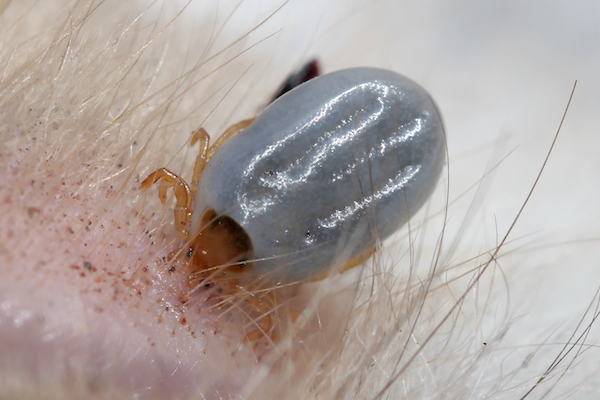 Ticks are seen as significant pests in farming where they can impact the productivity and health of animals. Tick bites can also cause significant health issues and even death in pets and humans.

Protecting livestock and pets from tick bites is a must for farmers and pet owners. Although tick bites with humans is generally quite a rare occurrence, in some areas the risk of tick bites increases significantly, especially if out walking in the bush and longer grass.

There are over 70 species of tick in Australia and they can be grouped into hard ticks and soft ticks.

The brown dog tick (Rhipicephalus sanguineus) has increased its range in Australia in the last couple of years, along with the disease it carries canine ehrlichiosis, which is a serious threat to dogs. It’s development over the coming needs should be monitored.

Although there are variations between species, this would be a good generic description:

Where do ticks live?

Ticks typically live at ground level, in the leaf-litter. The will climb grass and low vegetation to get a good vantage point to attached to a passing hosting. They do this in a process called questing (see below).

The idea that ticks drop from trees is a bit of an urban myth, based on the location of some tick bites on the head, under the hairline. It is likely these ticks reach the head by crawling up the body.

Whilst there are variations between tick species, we can use the paralysis tick as a typical life-cycle.

Female ticks lay large numbers of eggs – up to 200 per day and several thousand in her life-time.

The eggs are laid in sheltered areas in dense foliage, under bark or in leaf-litter. The eggs are bound to each other and to the nearby surface with a sticky excretion.

The eggs hatch after 1-3 months depending on environmental conditions.

The larvae that hatch only have 6 legs and are barely visible to the naked eye.

The larvae need a blood meal to moult. After feeding for up to a week, they fall to the ground and will moult into the nymph stage over a period of weeks.

Nymphs can survive for several months without a blood meal.

Much like the larva, nymphs need a blood meal to develop and again will feed for up to a week before falling to the ground. Over the following weeks the nymphs moult to become adult ticks, either a male or female.

Nymphs can survive for many months without a blood meal.

Female ticks need a blood meal in order to produce eggs. They may remain on the host feeding for 1-3 weeks to get fully engorged.

Male ticks also try and find hosts, but not for feeding, but rather to find female ticks to mate. Once the male has mated it will die. Although sometimes they parasitise the female tick, feeding on her haemolymph.

Once feeding is complete the female drops to the group and once the eggs have developed, lays the eggs in batches of up to 200 eggs in sheltered spots. The female lays several thousand eggs over a month or so and dies shortly after egg laying is complete.

Ticks are present year round and numbers of paralysis tick will increase during wetting weather. Although ticks and the risk of tick bite are ever present, adult ticks are more common in spring and summer with tick larvae are likely to be more abundant during autumn and winter.

How do ticks find their host?

Questing is the host seeking behaviour exhibited by hard ticks, such as the paralysis tick.

Ticks climb grass or low vegetation and extend their front legs, waving them to detect a host. The Haller’s organ on the front legs is capable to detecting heat, humidity and odour – critical in detecting a potential host.

Moving from the safety and humid environment of the leaf litter to the exposed questing site is a risky activity and so it is important that the ticks latch onto a passing host as soon as possible.

The tick bite itself is unlikely to be felt, but the host will react to components in the saliva that the tick injects to prevent the blood from clotting. Most commonly this is a mild allergic reaction – a hard lump, redness and itching at the bite site. For a few, a severe allergic reaction may occur (generally within 2-3 hrs) resulting in analphylatic shock, which may be life-threatening.

Perhaps the most unusual condition that can develop after a tick bite is an allergy to red meat, milk and gelatin. This develops as the protein that causes the allergic reaction is found in the gut of ticks and all mammalian meats, such as beef, pork, lamb, kangaroo and venison).

Ticks can transmit a number of diseases including rickettsial spotted fever (sometimes called tick typhus) and lyme disease. Although a number of patients in Australia have shown lyme disease symptoms after a tick bite (fatigue, joint pain, headaches, trouble concentrating and sensory issues), the bacteria that causes lyme disease has not been found in Australia. However, the Australian Government recognise that there are people who exhibit Debilitating Symptom Complexes Attributable to Ticks (DSCATT). Research continues in this area.

The paralysis tick contains a neurotoxin in its saliva that lead to the paralysis. The longer the tick remains in the skin the more likely the victim will experience severe symptoms.

As children are smaller and may not notice the tick immediately, they are at risk of developing more severe symptoms.

Cats and dogs tend to be more sensitive to the toxin, with dogs the most sensitive. In addition, as the tick may not be found for several days (due to their fur), they can receive a significant dose of toxin, which can be fatal. Even after the tick has been removed, the symptoms can worsen.

Symptoms include a rash and flu-like symptoms. This can progress to sore glands, unsteadiness when walking, weak limbs and a paralysed face. Some may also be unable to tolerate bright lights. If you experience any of the symptoms after experiencing a tick bite, seek medical attention immediately.

For cats and dogs, typical symptoms of tick paralysis include:

With the symptoms progressing as the poisoning takes hold, it is important to remove the tick using the correct technique, as soon as possible.

How to safely remove a tick?

The important point to note in tick removal, is that you must avoid squeezing the tick as this will inject more toxin into the body.

If you are at all in doubt about how to remove a tick safety, please see seek medical attention. For pets, it is always best to take the animal to the vet and treatment may well be required.

There are two recommended methods for the safe removal of ticks:

Don’t spray the tick with insecticide, methylated spirits, nail polish remover or essential oils. These chemicals are likely to cause the tick to inject more toxins.

How to protect your pet from ticks?

Ticks can get into any backyard (on native animals) and pets can pick up ticks on their walks or wandering around the neighbourhood.

Although the risk is higher in tick prone areas, checking your pet regularly for ticks is a good habit. For long hair varieties this can be time consuming, but essential activity.

There are a wide range of tick collars, spot-ons, tablets and rinses available on the market. Dog owners should consult their vet.

Although cats are less likely to pick up ticks than dogs, it does occur. Unfortunately the range of tick prevention products available to cats is very limited due to their increased sensitivity to many insecticides. Speak to your vet before applying any product.

How to prevent a tick infestation?

Keeping your backyard free from ticks will help prevent your pets and children getting bitten by ticks when playing in the yard.

There are 3 key actions you can take:

Prevent native animals accessing your backyard and under house area. This may sound like an impossible task, but if you’re in an area with bandicoots (a common carrier of ticks), installing a metal fence into the ground around your property to prevent bandicoot entry or digging under fences can be very effective.

A professional tick treatment to your lawn can be very effective in eliminating any ticks present. As these treatments have limited residual activity, it is advised to have regular treatments through the year in tick prone areas.