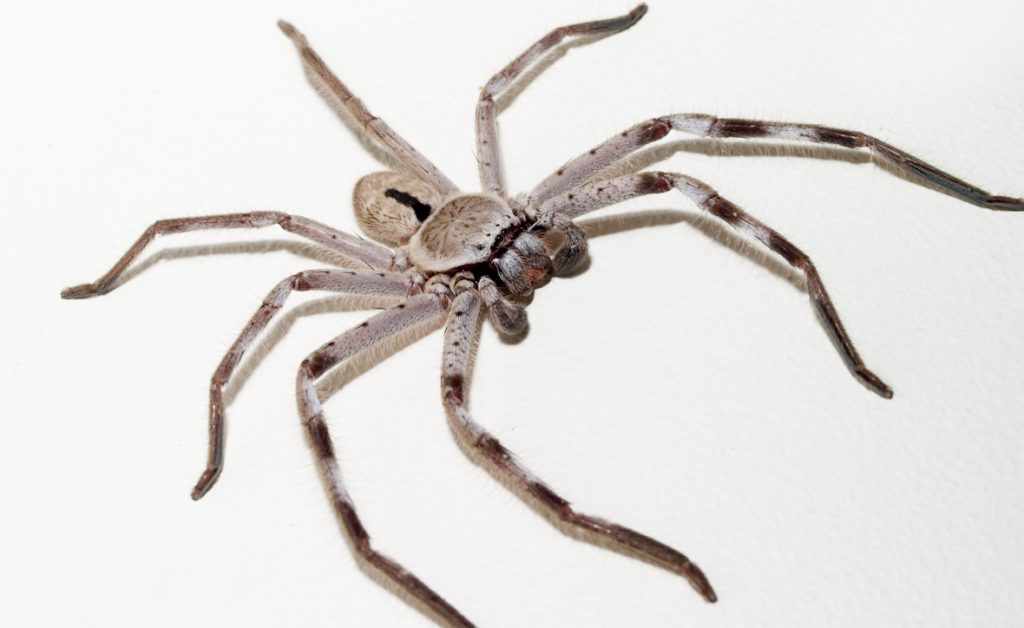 There are a number of species of huntsman spiders, many have a common name. A generic common name that is sometime used is the giant crab spider. They are sometimes called tarantulas due to their size, but this is incorrect.

Where are huntsman spiders found?

Huntsman spiders are found throughout Australian and globally in most warm temperate / tropical regions.

There nearly a 100 different species of huntsman spider.

Their natural habitat is underneath bark and rocks. Many species have very flattened bodies to allow them to squeeze into the tightest of spaces (think into a car, under the back door, etc!).

There are a range of species generally black, grey or brown in colour, but often with some striking patterns. The sizes of the different species is also variable – although their bodies rarely exceed 2 cm long, the leg span of the largest Australian species can exceed 15 cm!

Apart from the flattened body in some species, all have a crab-like arrangement to their legs. Their joints are twisted so their legs can spread out laterally and to the front (which also aids squeezing into small spaces).

There is also a social huntsman species (Delena cancerides), which lives in groups of up to 200 hundred, with a single dominant female.

Huntsman spiders do not build webs – they are considered a ground, running or hunting spider.

The mating ritual of huntsman involves a lengthy courtship process which includes mutual caressing. Unlike in many other spider species, the male is rarely attacked during the courtship process.

The various huntsman species lay their eggs flat, oval egg sacs, containing up to 200 eggs. In many species the egg case will be placed under bark or rock, which the female will guard until they are ready to hatch. Some species will carry the egg sac under their body.

It will take several weeks for the eggs to hatch (depending on temperature). In some species the female spider will moisten and tear open the egg sac. The young huntsman spiderlings are pale and it takes several moults for their colour to darken. They will stay with the mother for several weeks / moults, before dispersing.

Huntsman spiders can live for 2 years or more.

Huntsman themselves have a number of predators including some predatory wasps, which will paralyse the huntsman and take it back to their nest to use a live food for their larvae when they hatch.

Although huntsman may look scary, they are actually quite timid and will generally run way rather than bite. The exception can be females who are guarding an egg sac, who may get more aggressive.

Huntsman spiders are very much part of Australian life. Having less vegetation around the perimeter of the building will reduce the chances of a huntsman getting in. Having well fitted doors and windows (they need to be very well fitting), will also help.

Huntsman are generally considered as beneficial, in that they target other pests around the home including cockroaches.

It’s always a good idea to keep clothes off the ground and check the bed sheets in summer – huntsman will often come inside to escape the heat and squeeze under clothes and sheets is just like squeezing under bark… they feel quite at home!

Other species of spiders.