During 2017 there were some significant movements in the popularity of the main social media platforms. What happened, what are the predictions for 2018 and what should I be doing in my pest control business?

The top social networks in 2017

Facebook is still the king of social media, with 15 million unique monthly visitors in Australia as of December 2017, and 1 in 2 Australians using Facebook on a daily basis.

However, even before the recent revelations about Cambridge Analytica harvesting personal data from 50 million Facebook profiles to influence election results, its popularity had started to decline. Frequency of use was down around 20% on 2016 and level of engagement had also dropped significantly.

That said, of the 79% of Australians who use social media, 95% have an active Facebook account, along with 90% of businesses.

YouTube is the second biggest social media network, also with 15 million monthly visitors. Although these visitors are not as frequent as Facebook users, they are watching videos. Interestingly only 11% of SMBs have a presence on YouTube.

Instagram (owned by Facebook) comes in third with 9 million visitors per month. It is Australia’s fastest growing network, almost doubling its users over the last year. 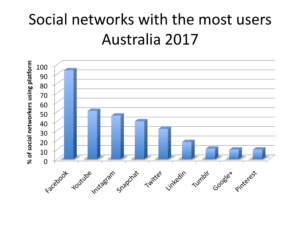 LinkedIn comes in sixth place with 4.2 million monthly visitors. LinkedIn is the second most popular social media site for businesses after Facebook.

Snapchat, with 4 million daily visitors, is also showing significant growth. For the under 25s, this is now the most popular social media network (more than Facebook or Instagram).

What does this mean for pest business in 2018?

For 2018 these trends are likely to continue, with the popularity of Instagram increasing and younger age groups deserting Facebook for Snapchat. However, to think that Facebook is dying is probably a bit premature; Facebook is still massively popular. As a business, if you are going to focus on one soci­al media platform, Facebook should be the one. After all, the target customers for pest control businesses tend to be in the older age groups, and they still love Facebook!

In addition, for pest control companies with a significant commercial pest business, LinkedIn should not be ignored as a business-to-business advertising opportunity.

Of course, everyone loves the movies. Video content can be highly engaging and should be part of your media strategy. Apart from including a few quality videos (no camera shake) on your website, setting up a YouTube channel to promote your video content helps with SEO. After all, YouTube is owned by Google.

Check out the Sensis Social Media Report 2017 to get into the details.