Termite baits are generally recognized as the most reliable method to achieve colony control, but what evidence is there that liquid soil treatments using a non-repellent insecticide can also deliver colony control?

Whereas termite baits are generally regarded as the best option for delivering colony control, there is little evidence supporting claims that soil treatments using non-repellent termiticides can also eliminate colonies. A recent study from the University of Florida was set up to compare the impact of a soil treatment of a non-repellent liquid termiticide (fipronil) to that of a chitin synthesis inhibitor (CSI) termite bait (noviflumuron), on whole colonies of Coptotermes gestroi.

Although the trial was carried out in a laboratory, the set up was designed to replicate likely field situations. Using whole colonies of Coptotermes gestroi (the Asian subterranean termite), they exposed part of each colony to either fipronil treated soil or a noviflumuron bait. The relevance in only exposing part of the colony to the treatment is that in the field, it is more than likely that the colony will be feeding on a variety of food sources, including those away from the treatment area.

The other key element of the study was distance. Using a series of interconnected tubing, colonies were given access to a wooden ‘house’ some 12m away from the colony. The treatments, either fipronil treated soil or noviflumuron bait were placed 7.5m away from the colony, between the colony and the ‘house’. Importantly, there was more than one route to get to the house, so the termites could avoid the treated route if they wanted to. The trial was run for a twelve-week period. 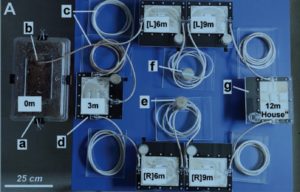 Within two weeks after the introduction of the fipronil soil treatment, all termites within 1.5m of the treatment had died. In addition, the treatment site exhibited the secondary repellency that can occur when large numbers of dead termites are found in a foraging gallery – termites sealed off and avoided the treated area for the remaining 10 weeks of the trial and used alternative routes to get to the feeding site. At the end of the trial, the populations of colonies exposed to fipronil were of similar size to the control colonies.

In contrast, colonies exposed to noviflumuron bait readily fed on the bait and there was no change in overall foraging activity during the first 40 days or so after the bait was introduced. Thereafter, foraging activity gradually declined throughout the foraging area, not just the foraging tunnel with the bait. By the end of the 12 week trial, bait exposed colonies were moribund with only a few soldiers and workers remaining. All colonies were eliminated within the 2 weeks following the end of the official trial.

This elegant trial clearly demonstrates the pros and cons of termite baits and non-repellent soil treatments as tools in termite management.

To attempt colony control, as should be the primary objective of any termite management recommendation, the use of termite baits provides the better option. Termites will readily forage on bait, unaware of the deleterious effect on the colony. However, the decline in activity is gradual which means it may take a couple of months for active termites to be eliminated from a property.

In contrast, a fipronil soil treatment will rapidly control termites in and close to the treated zone. This can give rise to secondary repellency, with termites avoiding dead nest mates in the treated area. As a result, fipronil from the treated zone is not transferred in sufficient quantities to deliver colony control, an observation that confirms the results from previous trials, which suggest that the maximum distance over which transfer occurs is less than 6m. With colony control unlikely with a liquid soil treatment, if a termite colony is not eliminated using an alternative technique, a colony attacking the property will likely persist, to potentially cause a problem in the future. If the soil treatment is not complete and continuous, the risks of a potential future attack are increased. Certainly, if the colony is within the treated zone (under the house), then a treated zone will not eliminate the termite activity.

Net, it is important to understand how products work and utilise them according to best practice to ensure the protection of property. Colony elimination should be attempted in the first instance – if the nest cannot be located baits provide a proven option, soil treatments do not. However, soil treatments can be effective in preventing termite access to a property, but it is important to ensure they are complete and continuous.