SPIDER BITES – ALL YOU NEED TO KNOW!

The following information on spider bites and spider bite first aid is a useful quick-reference guide for pest managers and homeowners alike.

Spider bites are a concern for many, especially those with small children and pets. This isn’t an irrational, arachnophobic fear! Due to the species present in Australia there are genuine reasons to avoid being bitten by a spider; the bites will often be painful, but some can cause serious illness and even death.

Although a few years old now, a government report on the venomous bites and stings from the Australian Institute of Health and Welfare gives an idea of the threat of spider bites. Of the 3500 Australians hospitalised due to a venomous bite or sting in 2017-18, 19% were due to spider bites. (Bee stings were the top cause of hospitalisation with 26% of cases.) Of the spider bites, the most common culprit was the redback with 42.5% of cases, followed by the white-tailed spider with 5.7% and funnel-web spiders with 3.8% of cases. However, the type of spider causing the bite could not be determined for some 45% of cases.

Here’s all you need to know about spider bites in Australia and the recommended first aid measures. 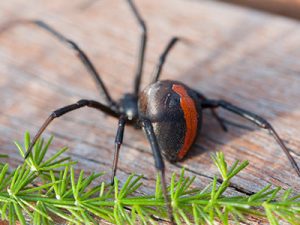 The redback spider bite is the cause of the highest number of spider bite hospitalisations in Australia, with the estimates for the number of redback bites each year varying between 2000 and 10,000.

Chances of being bitten: Only the female redback is of cause for concern and as the female does not leave her web, bites generally only occur if the web is disturbed. The female redback can be quite aggressive, especially if protecting her egg sac.

Bite venom: The redback bite contains a multi-component toxin, with a group of latrotoxin proteins being the most significant. Alpha-latrotoxin causes stimulation of neural synapses in mammals.

Bite symptoms: Sweating (including at the bite site), weakness and nausea.

First aid: Redback spider bites have not resulted in any deaths since the development of the antivenom in 1956. The redback bites are more of a concern for the young, the elderly and those with prevailing medical conditions. If bitten by a redback follow the standard spider bite first aid. If the victim is in one of the at-risk groups or if the symptoms worsen (anaphylaxis, collapse or severe pain), seek medical attention immediately. Bites of the related cupboard spider or false widow can cause similar symptoms to the redback bite.

White-tailed spider bites have been wrongly associated with necrotic ulceration at the bite site. This appears very much to be an urban myth.

Chances of being bitten: White-tailed spiders can be encountered when gardening, but if wearing gloves bites are unlikely. Most bites will occur indoors when the spider has found its way into clothing or between sheets – which mimic the tight spaces under bark and rocks where it normally hides.

Bite symptoms: Bite can be painful for a short period, with local swelling and rash. Any lump will generally resolve over a couple of days to a few weeks. 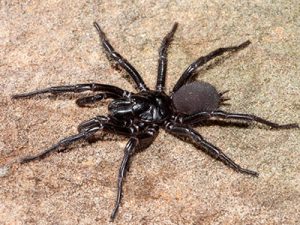 Funnel-web spiders rightly have a fearsome reputation. Their bite is physically painful – they are known to bite through nails and shoes. The venom in the bite is highly toxic. They are part of the mygalomorph group of spiders, which includes mouse spiders, which have also have a highly toxic bite. If the spider cannot be definitively identified, any bite from a large black spider should be treated as a suspected funnel-web spider.

Chances of being bitten: The chance of being bitten by a funnel web spider is relatively low; there are around 30 or so bites a year. The chance of being bitten increases if you are in a funnel-web spider hotspot. However, it is important to understand that the spiders only inject venom in around 15% of bites. The vast majority of bites are delivered by male spiders as they wander from their burrows when looking for a mate in summer and autumn or when heavy rain floods their burrows. They will sometimes find their way into homes and climb amongst shoes and clothes.

Bite venom: A large number of toxins in funnel-web venom attack various parts of the body – nervous system, muscles, blood vessels, kidney and heart. These atracotoxins that attack the nervous system are extremely toxic and are the main cause of lethal envenomation following a funnel-web spider bite.

Bite symptoms: Initial symptoms include nausea, sweating, drooling, shortness of breath and tingling around the lips. Symptoms progress to vomiting, headaches, high blood pressure and difficulty in breathing. Symptom onset occurs rapidly after a bite. If there is no medical intervention death may occur between 15 minutes (small children) and three days.

First aid: Funnel-web spider bites should be treated differently to other spider bites. The first aid is similar to snake bite first aid and involves the application of a pressure bandage.

Since the introduction of an antivenom in 1981, there have been no fatalities from funnel web spider bites. 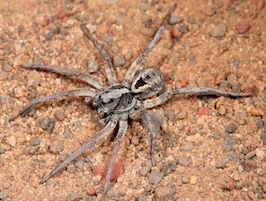 Wolf spiders are one of the most common ground-dwelling spiders found in Australia. As a result, it can be the cause of a number of spider bites, but the bite is generally quite mild.

Chances of being bitten: Of all the spiders, by virtue of its sheer numbers and being found in backyards across Australia, bites from wolf spiders are relatively common. Although they are hunting spiders, they are not particularly aggressive, and bites will most likely occur when trapped against the skin or manhandled. 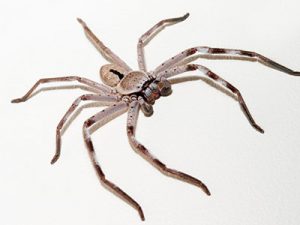 Huntsman spiders are considered amongst the scariest of spiders by virtue of their size, speed of movement and ability to ‘jump’ off walls. However, their bite is generally quite mild.

Chances of being bitten: As they live in their webs, which are recessed into cracks and crevices and they retreat into these hiding places when disturbed, bites are infrequent. 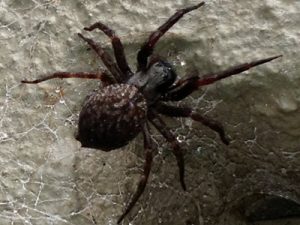 The black house spider is a medium-sized spider. As they are frequently found around homes and build funnel-like webs, non-experts may worry they are a funnel-web spider or similar. Although their bites can be painful, there is generally no need for medical attention.

Chances of being bitten: Bites are infrequent as they live in their webs, which are recessed into cracks and crevices. They retreat into these hiding places when disturbed.

Correct identification of the spider that delivers the bite can be very useful in deciding on the best medical treatment. Whilst it is generally not recommended to encourage the victim to try and catch the spider unless they are confident it can be done safely, taking a photo with their mobile phone is a very practical option.

Apply the funnel-web spider first aid to mouse spider bites or (if in doubt about identification) any large black spider bite.