These spiders are notorious for catching birds and snakes in their webs, and can have a leg span of 20 cm. Would you be able to identify a golden orb weaving spider?

Geographic distribution: Golden orb weaving spiders are common in tropical and subtropical areas worldwide. Of Australia’s species, T. edulis is most common in Western Australia, T. plumipes in Eastern Australia, and N. pilipes in the north and east.

Description: Golden orb weaver webs can be a metre or more in diameter, with support lines up to 6 metres in length, and are spun from distinctly golden silk that is also used for the egg-sacs. Often, the remains of prey are gathered into a long messy line in the middle of the web.

Female golden orb weavers have bodies up to 4 cm long, or up to 7 cm in exceptional individuals. The legs are long, narrow, and dark, with pale or yellow bands in some species. The cephalothorax is covered in short silvery-grey hair, and depending on species the abdomen can be a smooth grey oval, or longer and yellowish-brown.

Males are a few millimetres long, and usually black to reddish-brown. 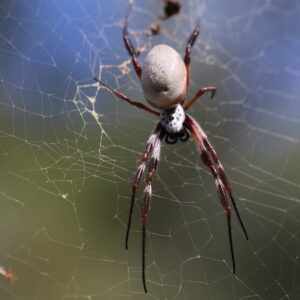 Life Cycle:  Golden orb weaving spiders mate in autumn, with up to six of the tiny males lurking at the edge of the female’s web and waiting for a safe moment to approach her. After mating she lays a single mass of eggs, covered in more golden silk, and places it among branches near her web or in dry leaf litter (varies depending on species). The eggs hatch in spring, with spiderlings building a communal web until they are old enough to disperse and start their own.

Habitat: Common in open woodland, and extremely common in gardens, parks, around houses, and in suburban bushlands. Tall mesh fences may support hundreds of webs.

Pest status:  Golden orb weavers eat many flying insect pests, but with their habit for building webs across paths between vegetation, they can cause panic to homeowners who walk into their webs unexpectedly. Bites are very rare, and at worst may cause slight redness, soreness, or dizziness. 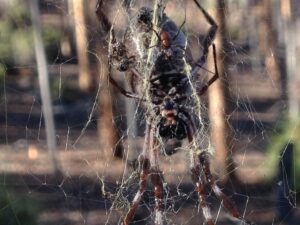 Treatment: No treatment is required. In fact, pesticide use may be stunting the growth of the spiders near human habitation, possibly by limiting their food supply. Webs may be physically removed.