Do you know the difference between the noisy miner and Indian (or common) myna?

Most members of the general public (and even a few pest professionals!) get confused between the noisy miner and Indian or common myna. Which is native, which is introduced and which is a pest?

The first part is easy. The noisy miner is a native Australian honeyeater and the common or Indian myna (main picture, above), is the introduced or invasive species. However, whereas many would view the Indian myna as an invasive pest (and it is), research by the University of Queensland and La Trobe University has shown that the native noisy miner (below) is the bigger pest and causing the most damage. 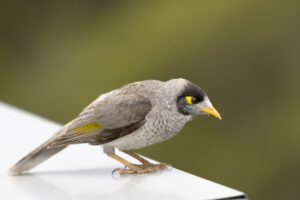 Indian myna is an introduced species from Asia. It is very aggressive and reduces endemic bird numbers by forcing native birds from their nesting places.

The noisy miners have a bully mentality and exclude nearly all other bird species from the area they occupy. Their aggression is sometimes focused on other animals, even humans.

The noisy miners are found throughout eastern Australia and live in colonies of up to several hundred birds and breed cooperatively, helping in the raising of non-related chicks. They are particularly good at adapted to disturbed wooded areas – land clearance in rural areas and urban areas are their prime real estate.

The research found that the noisy miner is taking over the declining woodland areas from smaller birds, causing steep declines in populations.The birds have become such a big problem they have been nominated as a threat under the national environment protection act.

Whilst control programs can be put in place for the Indian myna, with trapping programs proving successful, the noisy miner is a native species and is protected in all states and territories. Shooting is the best method of control for the noisy miner and can only be carried out under permit from the appropriate state wildlife agency.

The researchers are pushing for active control programs to be put in place. In the meantime, properly structured re-vegetation programs can re-dress the balance and help other native birds re-establish by creating an environment less favourable to the noisy miner.

Other types of pest birds.