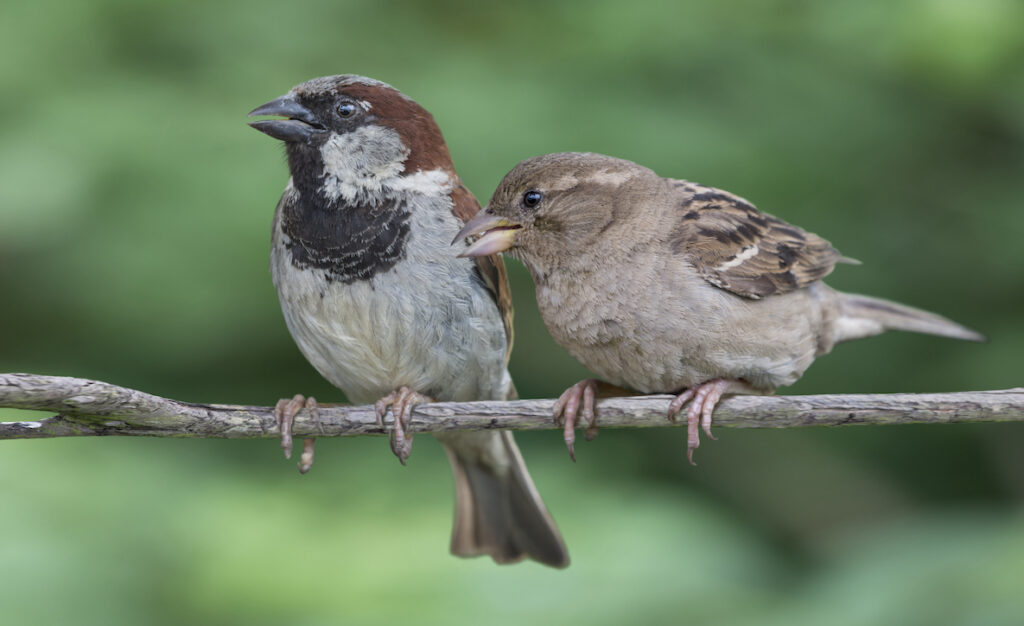 The house sparrow is an invasive bird in Australia.

Found worldwide, adapts well to most climatic conditions. In Australia the sparrow is widespread in the eastern states and into South Australian and the Northern Territory. There are a few isolated populations in Western Australia – the Nullarbor Plain makes it difficult for birds to cross from the east and the state Government monitor for and eliminate any new sparrow populations.

A brown / grey bird with strong sexual dimorphism. The female is generally light brown / grey, with some darker brown and white feathers in the wing. The male has a grey underneath with a black neck and ‘bib’ on the upper chest. The head is dark grey on the crown with chestnut brown feathers either side which extend onto the wings.

In rural areas they can form flocks of several thousands and cause damage to fruit, vegetable, grain and oilseed crops. They can also get into stored grain and animal feed silos.

In urban areas, they are mainly a nuisance through their nesting habits in homes and commercial buildings. Nests in roof voids may give rise to issues with bird mites entering the building and sometimes the nests end up blocking gutters and stormwater pipes.

However, the house sparrow has become less of a pest over recent years, something which appears to be a global issue rather than an issue specific to Australia. Learn about the possible reasons why sparrow numbers are on the decline.

Sparrows typically nest in hollows or thick vegetation, making a nest of grass, wool and feathers. As such roof voids in building make an ideal substitute nesting location.

Sparrows will breed at any time of the year, although peak breeding times are spring and summer

Typically sparrows will raise up to 3 broods per year, with each clutch will contain 3-6 eggs.

House sparrows are monogamous and will typically form pairs for life.

Sparrows will preferentially eat seeds, grains and weeds. However, they are generalist feeders and will feed on insects and a wide range of garbage in urban areas.

Sparrows are gregarious birds and will often form flocks with other bird species.

They hop rather than walk when on the ground.

Preventing access to seed, grain and animal feed will make any location less attractive to sparrows.

Exclusion from areas by the installation of suitable bird products by a professional pest manager.

Other species of bird pests.