Dr Partho Dhang, Urban Entomologist in Makati City in the Philippines, explores the impact of climate change on subterranean termites.

Urbanisation is changing our world. Today, the relationship between termites and humans resembles something of a confrontation, thanks to prime areas of the earth’s landmass being converted into real estate, for agriculture and development. Trade in wood and wood-derived products has also played a significant role in transporting termites across the globe. In this manner, invasive termite species have found new shelters in territories where they were previously unknown. The number of invasive termites has jumped from 17 to 28 in little over half a century (Evans et al., 2013). In light of this situation, it is important to know if climate change — a limiting factor in termite bio-ecology — will play a role in making them a greater concern.

On a global scale, termite diversity is greatest in tropical areas and decreases with increasing latitude, and only a few termite genera are found beyond 40° latitude (Eggleton, 2000). It is observed that termite distribution and abundance is closely linked to the distribution and abundance of rainfall (Buxton, 1981), and temperature and relative humidity (Cabrerra, 1994). Also, termite foraging patterns are linked to physical rather than biological parameters (Moura et al., 2006). Studies have shown that foraging activities of Coptotermes lacteus correlated with both soil and air temperature (Evans and Gleason, 2001). In another study, the preferred soil temperatures of the western subterranean termite, Reticulitermes hesperus was reported to be in the range of 29-32°C (Smith and Rust, 1994), indicating that temperature is a dominant factor in determining termite distribution.

In the context of global distribution, the latitudinal restriction of termites is a well-established fact, with their preference for warm environments possibly being due to the mutualistic system of the hindgut being adversely affected in temperatures below 23°C (Eggleton, 2000). The principal factor limiting termites in colder climes is that they are metabolically shut down by extreme cold to the extent that colonies may be prevented from feeding and other normal behaviour (Ewart et al., 2017).

According to the 2007 report from the Intergovernmental Panel on Climate Change (IPCC), the United Nations body for assessing the science related to climate change, global mean surface temperatures have risen by 0.74°C plus or minus 0.18°C when estimated by a linear trend over the last 100 years. The rate of warming over the last 50 years is almost double that over the last 100 years. Thus, it is speculated that climate changes can cause substantial changes in the microbial community in the termite gut (Arango, 2021) as well as in associated soil/nest materials, eventually influencing survival and distribution. If this is the case, then as cold locations become increasingly warmer, certain termite populations will move to higher latitudes to enjoy these warmer temperatures and ideal conditions.

Coptotermes formosanus, the best-known invasive species studied to date, is a tropical termite species that has so far been limited to southern areas of the US by cold winter temperatures (Potter, 1997), but with raising global temperatures, there is the possibility of its range expanding northwards. In colder areas of North America such as Wisconsin and southern Canada, populations of Reticulitermes flavipes appear to be gradually expanding their range and even swarming under natural outdoor conditions (Arango et al., 2014).

Northward movement of termite populations is also likely to happen in Japan, China, Korea and Taiwan, with Asia continuing to be a hotbed of invasive species. In this respect, C. formosanus is the species to watch, as it is currently present in areas of Japan, China and Taiwan but not Korea. It is thought that temperature is the crucial factor responsible for the distribution of C. formosanus in this region (Su and Tamashiro, 1987). The species has been reported in Japan in areas where the temperature drops lower than 4°C in the winter (Mori, 1987). This has led Lee et al. (2021) to speculate that if the temperature rises at the same rate that has been recorded over the past 100 years, this species may expand its distribution range farther north to reach South Korea from Japan and China in the future.

There is no doubt that the increase in climate temperature will provide the potential for geographic expansion of termites, particularly invasive species, enabled by global trade. In certain places these invasive species are directly competing with native species, and in one case as in the southern US, the invasive species, C. formosanus is reported to be more aggressive and capable of outcompeting the endemic Reticulitermes species (Henderson, 2014). Inter-specific competition could impact the redistribution of termites, the dynamics of structural timber damage, and related termite protection activities.

Another unique phenomenon noted as a result of climate change is hybridisation among invasive termite species. Chouvenc et al. (2015) observed that two invasive species, namely C. formosanus and C. gestroi, are mating and producing hybrid colonies with twice the growth rate of incipient conspecific colonies. In parts of Florida, the dispersal flight season of the two species has begun to overlap due to changes in local climate. Mating pairs of heterospecific individuals were observed in the field with C. gestroi males preferentially engaging in mating behaviour with C. formosanus females. The hybridisation between the two species may lead to the potential evolution of highly destructive ‘super termites’ due to their hybrid vigour (Buczkowski and Bertelsmeier, 2017). In fact, modelling by Buczkowski and Bertelsmeier show that, depending on climatic scenario, distribution of C. formosanus is expected to increase by 15-20% and C. gestroi by around 5%.

One area where the relationship between termites and climate change requires further investigation is in regard to methane production. Termites are known to produce 1-3% of global methane, which is a greenhouse gas believed to be responsible, at least in part, for climate change. Buczkowski and Bertelsmeier (2017) speculated about the possibility of a positive feedback loop where increases in termite activity leads to higher methane emissions, which further drives global warming, and leads to even greater termite activity and increased methane emissions. However, with the use of field instruments, researchers have shown that termite mounds in fact oxidise, on average, half of the methane produced before emission. Bacteria living in the mound walls or the soil beneath the nest are responsible for this ‘hidden biofilter’ mechanism (Nauer, 2018).

Termites are essential organisms in our terrestrial ecosystem and their presence is a positive indicator of ecological health, although as we know, they have a negative impact on human structures and agriculture. With the changing climate, modifications in their bio-ecology is already becoming apparent with expanding distribution and changes to swarming patterns. It is likely there will be other yet unknown changes in termite biology and foraging behaviour as they respond to the changing temperatures and rainfall patterns. With the changing climate, the impact of human-mediated dispersal of termites becomes more significant. There will be a need for greater vigilance in policing imports and managing termite incursions.

Termites have always responded to local climate conditions, through periods of drought or high rainfall, changing their reproductive and foraging behaviour accordingly. But with the changing climate, more permanent changes in weather patterns are likely to give rise to more permanent changes in behaviours and species distributions — something for pest managers to bear in mind. 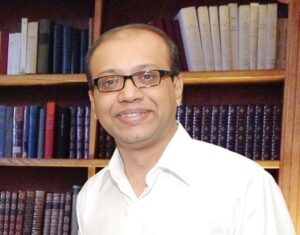 Dr Partho Dhang
Urban Entomologist, Makati City, Philippines
partho@urbanentomology.com
Partho Dhang is an urban entomologist with a PhD from the University of Madras, Chennai, India. His close association with the pest control industry, including research and development, training and business development, has allowed him to edit and write a number of books, all published by CABI. He is a prolific speaker at international conferences and has spoken at NPMA, ICUP, IRGWP and major conferences in the Asia-Pacific region. He is a regular contributor to various international publications and is a technical consultant for an international pest control magazine. He currently resides in the Philippines and India.

Mori H. 1987. In Proceedings of the International Symposium of Formosan Subterranean Termite 67th Meeting of the Pacific Branch of the Entomological Society of America, Oct 1987, Honolulu, Hawaii, USA.