Learn about the basics of thermal imaging and camera choice from Flir.

Thermal imagers are an increasingly popular, non-intrusive solution for finding pests in walls and other hidden places. From rodents to wasps to termites, both homeowners and pest managers are using thermal for pest control to quickly locate nests and avoid spreading chemicals like insecticides around homes. However, successfully finding pests requires the understanding of a few key things about thermal imaging and pest control.

A common misconception is that thermal imaging devices can see through walls – they can’t. Instead, thermal cameras detect temperature differences on the surface of a wall that is caused by something on the other side. For instance, a thermal camera won’t pick up a rodent moving through a wall, but could detect a rodent nest that has been generating heat for a long period of time and caused the outer wall to warm up.

With thermal cameras, interpreting the image takes skill. Understanding what patterns to look for requires training and practice, as it’s easy to incorrectly interpret an image. For example, if a large heat source like a nest isn’t obvious, sensitive thermal cameras may be able to detect irregular heat patterns, moisture, and other signs of damage that indicate the presence of a pest, like missing insulation or holes in walls that indicates an entry point.

A range of common intruders and their activity leave thermal signatures that can be detected with a quality thermal camera.

Termites can be found by looking for nests, moisture sources, and evidence of damage in walls. Although termites are cold blooded, when they release heat through their digestive processes the large numbers in a nest produces an obvious heat signal. They also construct mud tubes that have a high moisture content, creating irregular heat patterns on the surface of walls, ceilings and floors. 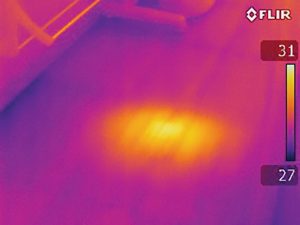 Like termites, other social insects are also cold-blooded, and like termites they do generate heat. The heat of a wasp nest, beehive, or other large cluster of social insects will usually generate enough heat to be detected by a thermal camera.

Rodents and other wildlife might create nests that can be detected, or might have damaged walls or moved insulation and created cold spots that can be seen in thermal. Nocturnal animals that emerge at night can also be tracked with thermal imaging, which works in complete darkness.

What Camera Do I Need?

The thermal camera needed depends on your pest situation. If you’re looking for a nest that’s generating a lot of heat, you may be able to spot the problem with an entry level camera like the Flir C5 or Flir One Pro. If you’re looking for termites and need to find evidence of moisture damage, you’ll probably need a higher-resolution solution like a Flir Exx-Series camera.

Thermal cameras take the guesswork out of pest detection, helping identify the exact location of nests and minimising the amount of damage needed to remove them, potentially saving you hours of work.

Imagery for illustrative purposes only and may not be all taken by the advertised cameras.