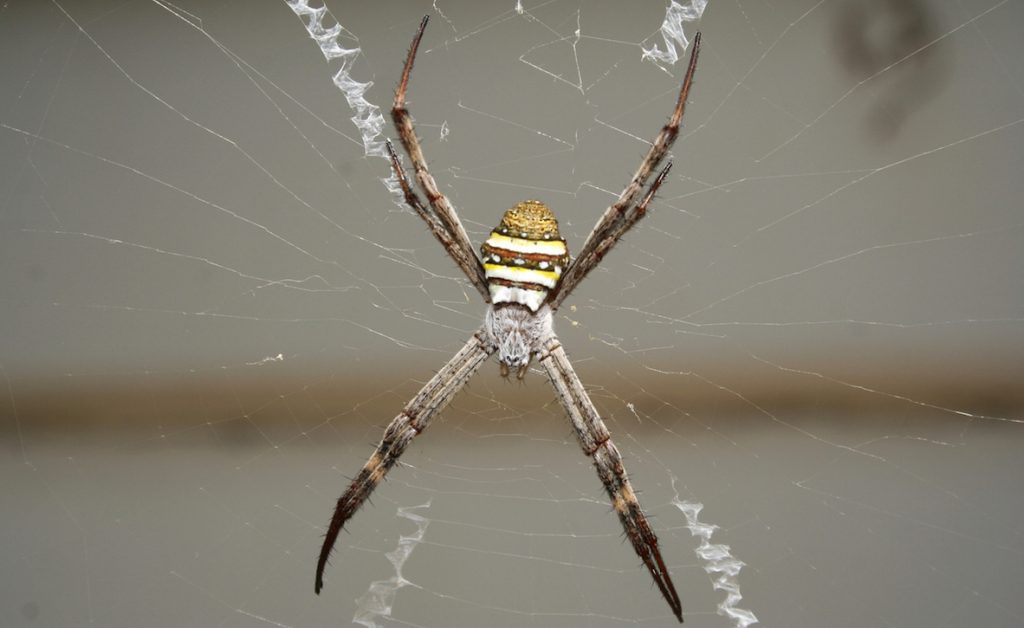 St Andrew’s cross spiders are a “garden spider”, although their natural habitat are the forested areas and heathlands of the east coast of Australia.

St Andrew’s cross spiders are generally viewed as a beneficial spider. Although they are not really a pest spider, they are viewed as an annoyance to some people, as they build their webs across paths and to arachnophobes they can be a bit scary due to their size.

The St Andrew’s cross spider can have a body length of up to 15 mm, but the legs can be significantly longer. They have obvious yellow, white and brown horizontal stripes across the abdomen and have the habit of resting in the middle of their webs upside down, with their legs grouped in pairs to form a cross (as in the flag of St Andrew – flag of Scotland).

The St Andrew’s cross spider sits in its web during the day and retreats to a hiding spot at night.

The St Andrew’s cross spider produces a fairly unique web. Although for the most part it’s invisible, the spider creates a visible cross of white silk (often with a zig zag pattern) in the middle of the web. These think areas of silk called stabilimenta reflect UV light and help in attracting insect prey. It is also hypothesised that it helps prevent larger animals such as birds from flying into the web.

The male St Andrew cross spider is significantly smaller than the female and lacks the bright colouring. They are found on the edges of the females web, sometimes in a smaller web nearby. When attempting to mate, the male produces a thread of silk – a mating thread – which it attaches to the female’s web and vibrates it to gain her attention.

The female lays up to 1400 in a pear shaped egg case suspend in threads of silk at the edge of the web or hidden among leaves.

The baby spiders or spiderlings hatch from their eggs in Autumn but stay within the egg sace over winter, emerging the following spring.

St Andrew’s cross spiders live for about a year.

St Andrew’s cross spiders are considered harmless to humans. It will generally only bite in self-defence. It’s bite is quite mild, no worse than a bee sting. Although, as with any bite or sting, those who may suffer allergies should seek medical attention if they suffer an allergic reaction after being bitten.

Removing or trimming back vegetation from the perimeter of the building and adjacent to paths and driveways will minimise the chances of bumping into a web.

St Andrew’s cross spiders are viewed as beneficial spiders, so it is better to manage them rather than spraying them with insecticide.