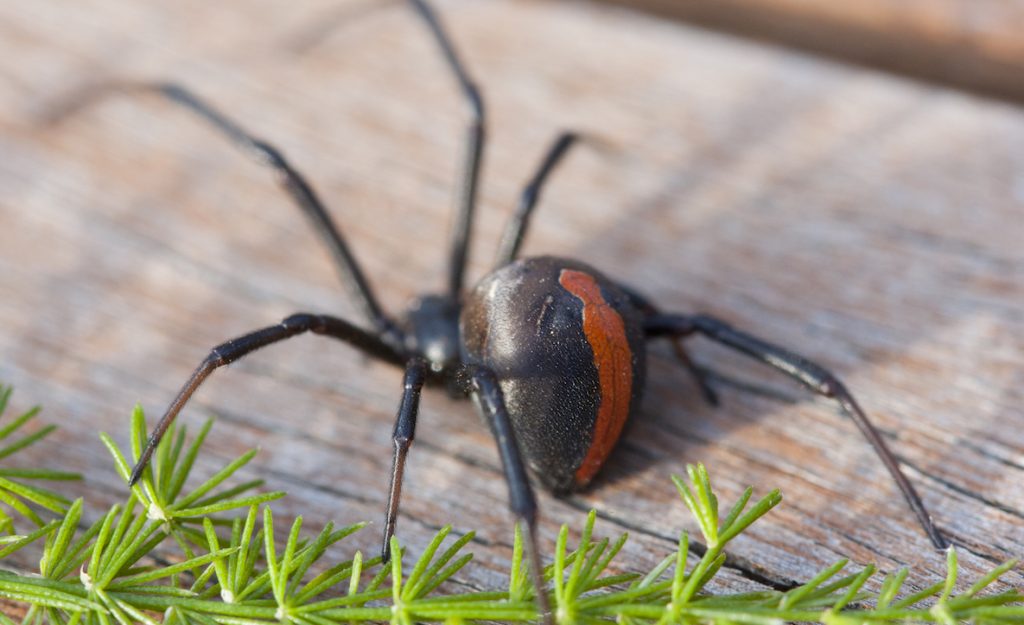 Where are redback spiders found?

Redback spiders (redbacks) are found throughout Australia. They are one of the most common causes of spider bite as they thrive in disturbed areas around buildings. In their natural environment they are typically found under rocks and logs but around the home they are found”

The female redback spider is the recognisable redback – a glossy black, spherical body, with a prominent red stripe on the upper side and an hour glass shaped red or orange stripe on the underside. The front pair of legs are significantly longer than the others.

There are colour variations. Sometimes they are more of a brown colour and sometimes the red stripes are broken. The juvenile redbacks have additional white marking on the abdomen.

The male redback is significantly smaller than the female and the markings are less distinct – often more brown in colour with broken red and white markings.

The redback spider web is a messy tangled web, often with dried leaves or other debris entangled.

The mating of the redback spider is somewhat infamous as indeed, the male spider often dies in the act of mating! Males spider do not spin their own web but tend to hang around the perimeter of female’s web, not only picking up bits of food but assessing the right time to try and mate. The mating ritual is quite elaborate as the male needs to get close enough to mate without being eaten first. Once close enough, he does a headstand and offers his abdomen to the female as a distraction, as he inserts his mating palps. Most males do not survive this process!

Redback females produce egg sacs which contain up to 250 eggs. These egg sacs are suspended within the webs.

The baby redbacks or spiderlings hatch from their eggs within a couple of weeks but remain inside the egg sac until after their first moult. They then disperse by ballooning, by producing a line of silk which they allow the wind to catch and carry them away.

Female redbacks mature after about four months and can live for a couple of years. Males only live for around 6 months (before they are eaten during the mating process!).

Redbacks will capture and feed on a wide range of insects and other spiders. However they will eat whatever they can catch in their web, including small lizards and even mice.

Only the female redback bite is dangerous. Redbacks rarely leave their webs, so receiving a bite is normally through accidental contact. An anti-venom has been available since 1956 and no deaths to redback bites have occurred since its introduction.

The redback is a close relative of the katipo found in New Zealand and the black widow spiders found in the US.

Other than keeping rubbish and stored goods away from the perimeter of the property, the only way to eliminate a redback problem or prevent them building their webs is with a professional pest treatment.

Information on other types of spiders.