Rats and mice are pest species that cause enormous amounts of damage, food loss, health issues and more. We invest many resources in their control, with a strong emphasis on the use of toxic baits. But the world is changing. The use of anti-coagulant rodenticides is under grave threat in Europe, and increasing restrictions are being placed on rodenticides in the USA.

In Europe, in addition to concerns over toxicity issues to non-target species, manufacturers have had to reduce the concentration of their rodenticide actives from the typical 0.005 g/kg to below 0.003 g/kg, with consequent resistance concerns. Almost all current anticoagulant rodenticide products have recently been classified as toxic to human reproduction. It’s more evidence (as if it were needed) that politicians and regulatory bodies would prefer to see all such products taken off the market. It is clear that, as an industry, we must make every effort to use these products responsibly.

And it is not just anticoagulant rodenticides that are under fire. The Biocidal Products Committee (BPC) established by the European Chemicals Agency (ECHA) recently released its opinion on cholecalciferol (Vitamin D3). The committee advised that “…the overall conclusion of the BPC is that cholecalciferol should normally not be approved… unacceptable risks for primary and secondary poisoning for mammals and birds have been identified.”

It was also noted that “…cholecalciferol does cause suffering for several days in rodents due to calcification of tissues and organs and can generally not be considered as a humane method to control rodents.”

This underlines the increasing concern in the market regarding the humane control of rodents.

Ensystex continues to promote the responsible use of rodenticide products, in particular with its next generation product Muskil Dual Active Rodenticide with UV-tracking technology. It complies with EU legislation regarding lower levels of actives as it contains two actives, both at levels below the above safety threshold: 0.0025g/kg bromadiolone and 0.0025g/kg difenacoum.

Ensystex aims to foresee important developments in the industry so that it can continue to offer innovative solutions to the market. Australian professional pest managers need reliable alternatives to toxic baits and ways to reduce their reliance on them.

Monitoring blocs are an ideal tool to reduce the use of anti-coagulants, in that they allow confirmation of rodent activity before placing baits.

Nara Blocs are the first rodent monitoring blocks that are allergen-free and non-toxic. Allergen management has become a major topic in many food production companies; Nara Blocs have been developed in response to this call from the market.

Unlike traditional food-based monitors – which are prone to mould formation in damp areas and are often infested by non-target organisms, e.g. flour beetles, cockroaches, ants and snails –

Nara Blocs last up to 12 months indoors and outdoors. They are also available in a range of flavours. The fact that they are long-lasting means pest managers can identify the species of rodent present according to bite marks visible on the blocks.

A further new innovation is the development of Nara Spray, which targets rodents’ olfactory senses.

Rodent stations and traps are made of plastic, and plastic has its own chemical smell. If one were to hold a lighter to anything plastic, it smells extremely toxic; this is comparable to what rodents smell when entering a rodent station. A rodent’s sense of smell is many times better than that of a human. 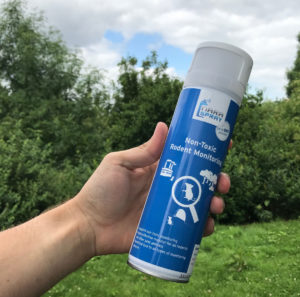 Nara Spray works by sealing away the plastic smell, masking it with a new scent, that makes the stations more attractive to rodents. The effect lasts around 2-3 months, but after repeated application it will slowly soak into the stations. Renewing the scent every few months adds fresh attraction to stations, luring in new generations of pests.

The spray works on the same theory used by hunters, who use a dead rabbit to entice and trap foxes; so Nara Spray can also be used to spray a bait line towards stations to lure rodents from nearby bushes or holes. Scientific trials showed that rodents are curious and follow the smell over large distances, even up to 40 metres. Their sensitive noses pick up the scent like an irresistible cookie trail.

The spray is not only an aroma scent, but it also feeds the rodents with a nutritious vegetable oil, leading them to desire more. It consists of highly refined vegetable rapeseed oil that is highly nutritious for rats and mice. It has its own natural scent that is refined with an added meat/beef aroma.

One of the largest pest control companies in Europe has directed all its branches to spray every rodent station, trap and bait with Nara Spray. 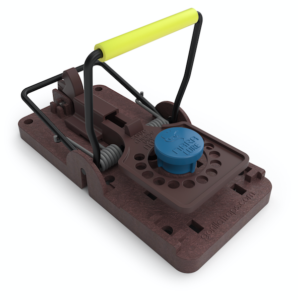 Gorilla Rodent Traps with Nara Lures complete the Nara range. Gorilla Traps are highly durable and humane traps that are used with an allergen-free and long-lasting lure.

The traps offer two distinct advantages. Firstly, the baits most commonly used with rodent traps are prone to mould formation in damp areas. Nara Lures have no such problems. Secondly, Gorilla traps have CE certification and approval from the German and Swedish Environmental Government Offices (with more countries to follow) making them a unique, humane control solution.

The humane kill aspect of the Gorilla Traps is most effectively shown in a video that uses a banana in place of the rodent.

Rats and mice are clever, and will often take the bait from a trap without being caught. This isn’t possible with Gorilla Traps and Nara Lures as the lure is locked into the trap. The rodent only needs to put a little pressure on the treadle in order to get caught. It’s not possible for the rodent to remove the bait from the Gorilla Trap without being caught.

In a recent test conducted by a large pest management company in the UK, Nara Lures were tested against a lure of peanut butter. Nara Lures were shown to catch close to 50% more mice, largely because the mice were able, with other traps, to remove the peanut butter without being caught.

If pest managers choose to add the Emitter Beep unit, the Gorilla Trap beeps loudly to signal that a rat or mouse has been caught. A great innovation and useful when setting traps in roof voids.

It is worth noting that Gorilla Traps also fit specified Rodenthor Rodent Stations, which are all HACCP Certified.