WHAT ARE THE CAUSES OF A MOUSE PLAGUE?

Grain growers, suppliers and pest managers always want to know – “Are we going to have a mouse plague this year?” Here’s a quick overview of mice plagues in Australia, and the prediction for 2020.


Mouse plagues are an infrequent problem in Australia but when they occur the effects can be devastating. The mouse plague of 1993 is considered Australia’s worst ever mouse plague and according to CSIRO caused an estimated $96 million worth of damage to crops, livestock (they will eat live animals when starving!), vehicles and buildings. The last major plague of 2010/11 was almost as bad.

Mouse plagues can occur in any of Australia’s grain growing regions when the conditions are right. For ideal mouse breeding conditions there needs to be good moisture (rainfall) and a plentiful food supply – this ensures large numbers of offspring per litter and high survival rates of young mice.

As with any pest management monitoring is the key to success. It’s important for growers to remain vigilant because even if mouse numbers are low, with their rapid reproductive rate, mouse numbers can quickly explode under favourable conditions. Rarely are conditions the same across the whole grain growing regions, so it’s important that monitoring occurs on a local level.

For 2020, CSIRO are reporting increased mouse numbers from SE South Australia through to a few patchy areas in NW Victoria. The mouse numbers in these areas are higher than recent years due to the good spring and summer rainfall which developed excellent crops, with storm and wind damage just before harvest leaving quality grain on the ground as a food source. A high risk of a mouse plague is forecast for South Australia, with mouse numbers of 200-600 mice/ha already recorded in March, which is very high for that time of year. Maximum numbers are predicted for late Autumn with potential to cause significant damage to crops at sowing.

One of the main challenges in dealing with a mouse plague is ensuring there is sufficient product to deal with the infestations. Suppliers cannot simply store large quantities of rodent bait “just in case”. It’s not just a question of forecasting whether a plague will occur and the size of the plague, but perhaps the critical aspect is timing. It takes time to produce the amount of product to deal with the infestation and although there is some local manufacturing capability (grain is mixed with zinc phosphide), much of the commercial product is imported.

Although mouse plagues predominantly impact growers and the towns in the nearby rural areas, any major outbreak will impact rodent bait supply, which can impact product availability in all parts of Australia. 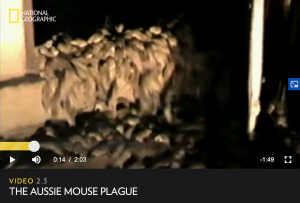