Steve Broadbent, Ensystex regional director, explains what chlorantraniliprole is, how it works, and what it means for pest managers.

Chlorantraniliprole is an anthranilic diamide insecticide with a novel of action. Ryanodine receptors regulate the release of stored calcium from the cell cytoplasm. This release is essential for muscle contraction.

Chlorantraniliprole locks the ryanodine receptors partially open, rather like a doorstop. This means the calcium ions keep flowing out of the cell leading to impaired regulation, paralysis and ultimately death. Its action is specific to insect ryanodine, making it of relatively low toxicity to non-target species.

Chlorantraniliprole is a relatively new anthranilic diamide insecticide with a novel and very specific mode of action, activating insect ryanodine receptors. Ryanodine receptors (RyRs) play a critical role in muscle function. Use of this receptor system as a target is quite unique and something that most professional pest managers are unfamiliar with.

It was developed and patented by E.I. du Pont de Nemours and Company, Inc., though it has been licensed to Syngenta to commercialise in professional pest management markets.

A ryanodine receptor forms a pathway within a muscle cell through which calcium ions pass. It is found in the sarcoplasmic reticulum (from the Greek sarx, ‘flesh’), which is an organelle found in specific types of muscle fibres. Its function is to store calcium ions and then release them into the body, where they are absorbed when the muscles are in a relaxed position and released as the muscles contract. 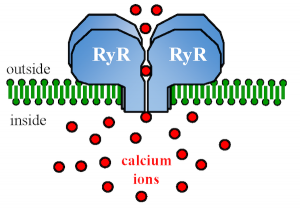 This organelle is a specialised type of endoplasmic reticulumthat consists of a complex network of vesicles, tubules, and cisternae, all of which are present inside the muscle cells. It helps to regulate the calcium levels within the body, allowing muscles to contract and function properly.

The differential selectivity chlorantraniliprole displays towards insect ryanodine receptors explains its low toxicity to mammals, birds and fish, and why it is not a scheduled poison.

Due to its unique chemical structure and novel mode of action, chlorantraniliprole controls pest populations resistant to other insecticidal products and is gaining wide acclaim in the control of Lepidopterous pests in agriculture. It is effective by ingestion and contact.

In addition to the information above, pest managers should note the following about chlorantraniliprole: