Australia takes incursions of new exotic ant species seriously. Over the past ten years, approximately $400 million has been spent attempting to eradicate several exotic ant species from Australia. Just recently another $400 million has been dedicated (over the next 10 years) to a single program alone – the red imported fire ant (Solenopsis invicta) eradication program in Brisbane. This program is now the second largest eradication program in Australia’s history, trailing the successful Brucellosis and Tuberculosis Eradication Program that ran in northern Australia in the 1980s.

Although Australia’s ant eradication programs are publicly known, and have high levels of local public engagement, they aren’t necessarily well known to the wider Australian population. So here is a summary of what is happening.

Specifically, aerial remote sensor technology has been developed to locate individual ant nests in large landscapes. The program has the largest team of ant detector dogs in the world, and work is prioritised based on habitat suitability models. When the program started it was immediately dealing with multiple incursions, one of which was a genetically and spatially discrete population covering 8300 ha, centred on Brisbane Port. This population was successfully eradicated in 2005 and is currently the world’s largest ant eradication. Four other established incursions of this species have also been eradicated from Sydney to Yarwun. Essentially Australia has been highly successful at dealing with this species, but we are yet to completely eradicate it.

The browsing ant (Lepisiota frauenfeldi) was detected for the first time in Perth in 2013. The population was established at Perth airport, and it was rapidly eradicated thanks to a rapid response by WA. Just prior to eradication being declared, another population (which probably originated from the airport population) was found in a Perth suburb. This population was declared eradicated in 2017. Unfortunately, just prior to this second population being finalised, another population was found and also had to undergo eradication measures. Although no ants have been found since, a broadscale search throughout WA continues to ensure that no ants persist anywhere. In 2015, the same species was found to be established in Darwin in multiple locations. This eradication program is also progressing well and the last ants were seen in 2018. But more recently a population was found in Brisbane. This small population has undergone treatments and has possibly been eradicated. Despite having numerous incursions around Australia, this species is likely to be the first ant species declared entirely eradicated from Australia.

The electric ant (Wasmannia auropunctata), known globally as the ‘little fire ant’, was found to have established in Queensland in 2005, and has been undergoing eradication since. The program is arguably the best eradication program against this species in the world. There are approximately 50 discrete populations of the ant known, and almost all of these are now confirmed eradicated, with only a handful being in the final stages of eradication assessment. It is very likely that this species will be completely eradicated in the coming years. 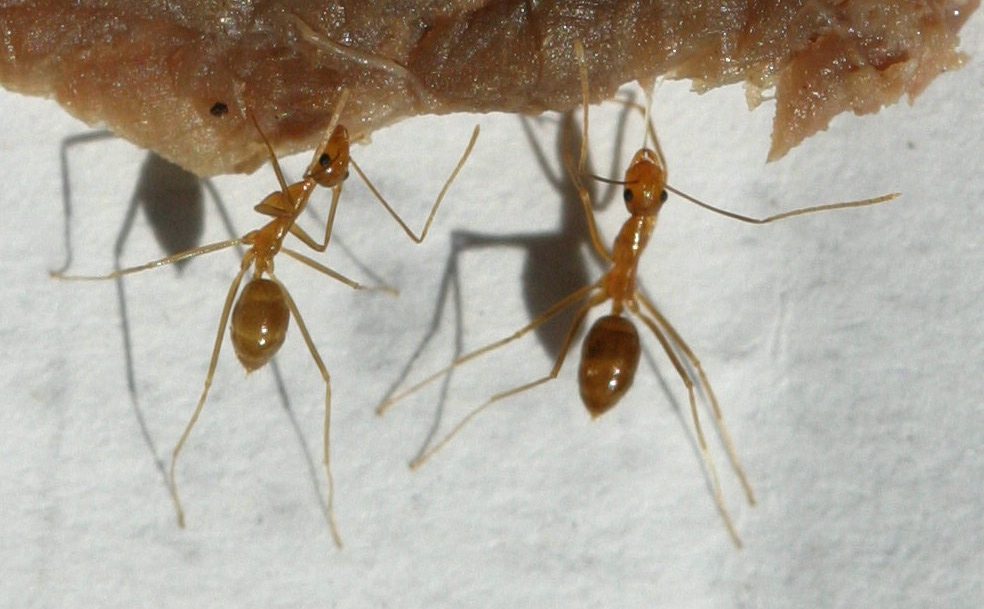 The yellow crazy ant also remains as a target species, although it will not be eradicated completely from Australia. Eradication programs are currently occurring in Cairns throughout the wet tropics area, Townsville, and in Arnhem Land. A population that was found in Darwin in 2009 has also been eradicated. As of September 2019, 42 infestation sites have been eradicated in northeast Arnhem Land, with helicopters distributing a revolutionary bait that mixes hydrogel with a liquid sugar solution. The same bait has also been used in Townsville and recently trialled in Cairns

Overall, Australia’s record of invasive ant species management is arguably the best in the world. New Zealand also has an impressive record, but predominately for single nests or very young incursions. Our ability to eradicate new incursions is definitely improving, but improvements can certainly be made. The greatest breakthroughs on the horizon are seen to be genetic-based baits, as well as novel dispersal methods, such as drones.

Other species of ants.

For the more detail on the yellow crazy ant program in Arnhem Land, check out this ABC report.