The larvae of these moths can eat solid wood and can quickly kill a small tree – would you be able to identify a Pecan stem-girdler?

The increasing number of common names reflects the increasingly broad diet of this pest. They belong to the Xyloryctidae family, the timber moths.

Description: The caterpillars are a pale brown, wrinkled, and mostly hairless, with a dark brown head capsule. Adult moths are up to 40mm long – enormous compared to their relatives in the so-called micromoth families – with satiny white bodies and wings, and a black-and-yellow-banded abdomen. If disturbed, the moths will flip onto their back or sides, and curl their abdomen to raise the yellow tip. Some adults have a tiny black spot in the middle of the forewing’s upper surface.

Life-cycle: 40 or so eggs are laid on branches or the main trunk of the tree, usually near existing wounds. The caterpillars immediately bore in when they hatch, and eat the sapwood. Their exit hole is usually covered by frass and brown silk, which can become a sizable mass. One or two years later, the caterpillars pupate in their tunnels, and emerge as nocturnal adults. 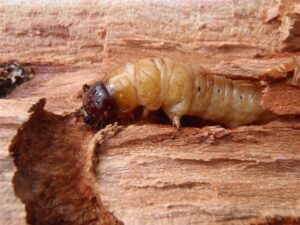 Geographic distribution: Native to Australia, and found in all parts of the mainland and Tasmania.

Habitat: The larvae of this moth seem to be capable of developing in a wide range of tree species, with the caterpillars having been found eating casuarinas, banksias and wattles, and especially black wattle – probably their original hostplant. They are now also found in a wide variety of native, exotic and cultivated trees including: plane, oak, elm, birch, maple, apple, cherry, apricot, peach, raspberry, wisteria, cassia, edible figs, citrus, gingko, lantana, grapevines and pecans.

Pest status: Over the last 100 years the moth has become an increasingly serious pest in a range of exotic and commercial trees. Initial damage may cause the bark to weep clear or yellowish exudate, or gum. Later damage to the sapwood can seriously weaken or entirely ringbark the branch, including large ones, or the main trunk.

Treatment: Surface insecticides may prevent the caterpillars from establishing. Injected insecticides are ill-advised in any tree used for fruit production, and the caterpillars are unaffected by imidacloprid. Lepidopteran-specific insecticides may be injected into the sapwood, to kill new larvae as they bore in, and will eventually kill older caterpillars. Alternatively, scraping the frass away from the caterpillar’s hole and driving a copper wire into the tunnel, injecting insecticide, or plugging the hole with pesticide-soaked cotton, may also prove effective, on a small scale. Some success has also been found with egg parasitic wasps in the genus Trichogramma.