TERMITES SAVE THE RAINFOREST IN TIMES OF DROUGHT

An international team of researchers has investigated how termite activity changes during times of drought – and the results are surprising.

As social insects, it is widely acknowledged that termites have an important role to play in tropical ecosystems. However, a new study published in the journal Science is one of the first to identify just how important that role is, especially during times of drought.

Termites are highly abundant in tropical ecosystems. As moisture-loving creatures, the mud ‘sheeting’ and mud tubes they create form temporary above-ground protective structures that allow them to move about in the forest even during dry conditions. As one of the few creatures that can break down cellulose, they have an important role in soil processes including decomposing and increasing moisture. However, the role of termites in these processes in tropical rainforests has not been fully quantified using real-world experiments until now.

The large-scale study was a collaboration between The University of Western Australia, the universities of Hong Kong and Malaysia, and British researchers from the University of Liverpool and the Natural History Museum. The international research team looked at the impact of termites both during the El Niño drought and afterwards, in the rainforests of Malaysian Borneo.

Associate Professor Theodore Evans of The University of Western Australia said, “The sheer quantity of termites suggests these insects have important roles to play in rainforest ecosystems, however what that role is has never been understood up until now.

“That is partly due to their small size, and because they live underground, it makes them harder to study compared to other larger animals.”

In 2014, the research team set out to compare areas of high termite activity with areas of low termite activity, with the aim of understanding the impacts termites have on the rainforest. However, a year into the study, the rainforest was hit by a severe drought caused by a strong El Niño event in 2015-16. At first, the researchers worried their experiment on rainforest insect activity would be compromised. But the halt in rain turned out to be a rare opportunity to study how termites affect a forest during drought.

The team set up experimental plots within an old-growth tropical rainforest in the Maliau Basin Conservation Area in Sabah, Malaysia, with each plot being about the size of five Olympic swimming pools. In four of those plots, the researchers suppressed termite activity by both physically removing all termite mounds, and by using termite baits made using treated toilet paper rolls (for wood feeders) and treated tea bags (for leaf litter feeders).

“As toilet paper is almost pure cellulose, it will be eaten only by animals that target cellulose,” wrote Professor Evans. The result being that the baits effectively targeted termites, removing them from the rainforest, while the 14 other most commonly found invertebrate groups, including ants and beetles, were unaffected.

Over two years, the team also removed all termite mounds that appeared, while replenishing the toilet paper bait every six months. In the end, about 3500 rolls were used. The team monitored termite activity in these ‘suppressed’ plots – where termite numbers had been suppressed by 45% – and compared it with the four control plots, where the researchers had not interfered. Both types of plots where monitored both during the El Niño drought and afterwards.

The expectation would have been to see termites becoming less active and retreating to their nests in times of drought; however, this was not the case. During the drought period, not only had termite numbers increased but also the e ect of their activity was plain to see, with seedling plants surviving at a greater rate in the plots with higher numbers of termites.

“What we found was that termite activity doubled during drought with them eating up to 40 per cent more leaf litter,” wrote Professor Evans.

“The digested leaf litter was then returned to the soil as nutrients, with termites affecting the distribution of several soil nutrients, including nitrogen compounds, potassium and other metals. This revealed that current climate models are underestimating the carbon flux into the atmosphere during drought periods.”

Professor Evans believes that because termites need moist conditions to be active during the drought, they moved groundwater to the surface soil. This increased soil moisture about 36%, compared with the termite suppression plots, which in turn increased seedling survival by 51%.

The researchers also suggested that drought conditions possibly make the rainforest soil drier, and termites’ tunnels less waterlogged, making their movement through the environment easier. The dry conditions could have also reduced competition from fungi, the other main decomposers in tropical forests.

“Fungi need to have water and food in the same place in order to survive and grow, which is why fungi do well in wet environments,” Professor Evans said. “During dry periods, the food and water are separated, with the food (wood and leaf litter) on the (dry) soil surface, and the water at depth (groundwater). Termites carry water to their food and nests (they have special water sacs for this purpose), and so can be active and continue feeding during dry periods.”

The drought may also have suppressed the activity of ants, one of the main predators of termites, wrote British ecologist and joint principal investigator, Professor Kate Parr from the University of Liverpool. This could, in turn, have had a positive effect on termites.

Professor Parr said, ‘While there has been some work exploring how severe drought affects plants in tropical rainforests, our study shows for the first time that having termites helps protect rainforests from the effects of drought. Termites might only be small but collectively their presence can help reduce the effects of climate change in tropical systems.”

Professor Evans added, “The study provides further evidence about the importance of conserving important natural ecosystems by understanding their biology so we can protect them in a time of rapid environmental change.”

How does this compare to Australia?

In tropical rainforests such as Borneo, the level of soil moisture is often too wet for termites, so when it dries out, soil moisture becomes more optimal and termite activity increases. And even if it is dry on the surface, it doesn’t take too much energy for the termites to bring up some moisture from the soil to the feeding site (in the ‘water sacs’ attached to their salivary glands).

Conversely, in much of Australia the soil moisture tends to be on the dry side for optimal termite activity. So during extended dry periods, termite activity drops off, as it is too diffcult or impossible for the termites to transport water to the feeding site – the reason why termites are often located in areas of the building where there is a water leak. Of course during the wet periods in Australia, soil moisture levels become optimum and termite activity will increase. 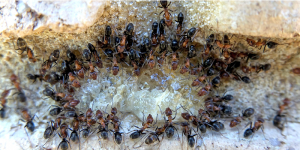 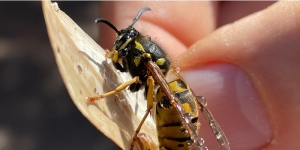