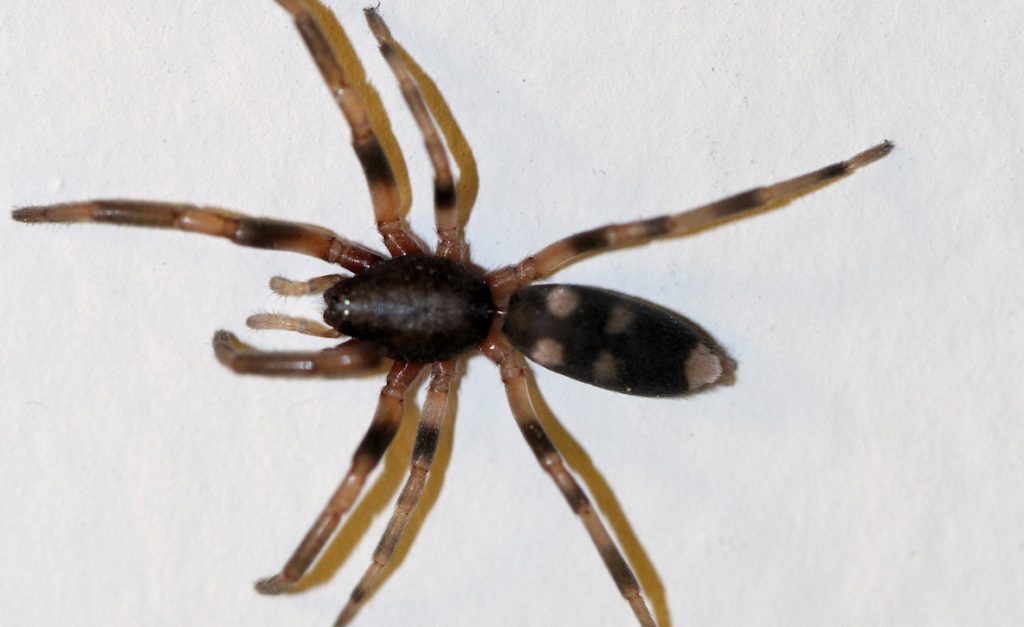 Where are white-tailed spiders found?

White-tailed spiders are native to Australia.

Their natural habitat is underneath bark and rocks and in the leaf litter, where they hunt for their prey. When they find their way into homes, sheets and clothing (especially left on the floor) are favoured hiding spots as they are similar to their natural resting places.

White-tail spiders have a dark grey to black, slim and elongated body, with two pairs of faint white spots on the abdomen and a white spot at the tip. The leg coloration is dark orange / brown bands.

White-tailed spiders do not build webs – they are considered a running or hunting spider.

The male spider approaches the female from the front but will only approach if they get an appropriate signal from the female (otherwise they could end up being dinner).

The females make temporary silk retreats where she lays up to 90 eggs in a disc-shaped egg sac.

The female spider guards the egg sac until the baby white-tails or spiderlings emerge. As soon as they disperse they are off to find their first meal.

White-tailed spiders are not tolerant of cold weather and many die off over winter in colder areas. It is assumed they generally live for no more than a couple of years.

They are a nocturnal hunter (most active at night).

White-tailed spiders have a very painful bite, however there is no evidence that the white-tailed spider bite cause necrotic ulcers (where the flesh gets eaten away). There are no toxins in the white-tail spider venom that can cause ulcers. Of 130 confirmed bites in a scientific study, none produced a skin ulcer.

It is believed that ulcers may form after any spider bite, and are probably due to infection from bacteria, which has been introduced into the bite through scratching, dirt or possible off the spider’s fangs.

The white-tailed spider bite causes a painful initial burning pain, followed by swelling and itchiness at the bite site.

Keeping spider webs in check in around the home will reduce the number of potential prey items around to attract white-tail spiders. Keeping clothes and bedding off the floor is a good idea too!

Information on other species of spiders.