RESISTANCE TO ANTICOAGULANTS? NOT IN WA

Home » RESISTANCE TO ANTICOAGULANTS? NOT IN WA

A study of mouse populations in Western Australia has found that they lack a specific genetic mutation that confers resistance to first generation anticoagulant rodenticides.

It’s been more than 60 years since the house mouse (Mus musculus) first displayed signs of resistance to anticoagulant rodenticides, specifically warfarin and diphacinone. In response, we saw the development of second generation compounds, with greater acute toxicities, yet rodents have now developed resistance to these as well. The phenomenon is well documented worldwide, but surprisingly, there is little information about the extent of resistance in rodents in Australia, and even less about the house mouse specifically.

Previously, resistance in Mus musculus to warfarin had only been recorded in mice from Lord Howe Island and Sydney, using no-choice feeding studies. To find some answers, a team of university researchers has provided the first genetic data on anticoagulant rodenticide (AR) resistance in two contrasting house mouse populations in Western Australia.

In WA, neither rats nor mice have been tested to quantify the levels of resistance to ARs despite the free use of both first and second generation rodenticides by both government agencies and the general public. The evidence of secondary poisoning and AR residues in non-target species suggests rodenticides are heavily used in WA, with chemical residues of ARs detected in a wide variety of environments, including in waterways.

Global research (particularly in Europe) has shown that resistance to ARs happens as a result of mutations to the Vitamin K epOxide Reductase Complex (VKORC1) gene. This gene is involved in the synthesis of vitamin K and is important in blood clotting and bone formation in mice.

The 2020 study conducted by the team from Edith Cowan University, WA, investigated whether VKORC1 mutations were present within populations of M. musculus in the urban area of Perth and within a population of the south-east Asian house mouse (M. musculus castaneus) from Browse Island o the coast of WA where ARs have not been used.

Researchers took genetic samples from 34 house mice from the urban area of Perth and 15 mice from Browse Island. The house mice from both samples were not shown to have any genetic mutations to the VKORC1 gene. This was a surprising result, considering that anecdotally, professional pest managers in WA have reportedly observed resistance to warfarin and coumatetralyl (first generation) and bromadiolone (second generation) in Perth house mice (Piggott D, 2019, pers. comm.).

Despite this finding, there are still other means by which mice in WA show resistance to anticoagulants – having mutations to the VKORC1 gene is simply one mechanism (of many) that mice have to exhibit resistance to poisoning. For example, it might be the case that the genetic mutation was never present in the founder Mus musculus individuals that arrived in Australia in the 18th century. Or perhaps the mice were once resistant, but this mechanism has been lost due to the wave of second generation rodenticide use, reducing the numbers of resistant individuals until the mechanism was eradicated.

So what do the findings mean for pest managers, specifically those in WA? With genetic data strongly indicating that mice do not exhibit resistance to ARs, the authors suggest that pest managers should consider using first generation rodenticides where possible rather than immediately using products with second generation ARs on all jobs. Not only should this miminise the chances of resistance developing – an occasional switch from first generation ARs to second generation ARs should overcome any developing resistance in populations – but it also minimises the non-target secondary poisoning risks.

Even though this study has shown that mice in WA do not carry resistance in the VKORC1 gene, more extensive laboratory tests are needed – such as feeding trials and blood clot response tests – to get a clearer understanding of whether mice in the Perth region may exhibit resistance, but via another mechanism. 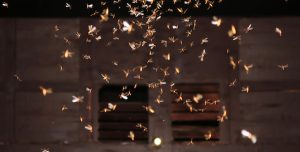