IS THE COBWEB BROOM UNDERRATED?

Pest manager and industry trainer Jay Turner explains why the humble cobweb broom is such a valuable tool in his spider control toolkit.

Pretty much whoever you ask within our industry will agree that it’s best to leave spider webs until a few weeks after you have treated before removing. The theory being that spiders will pick up the insecticide off the web. But being a trainer for this industry has also made me question and challenge whatever I was taught and thought I knew, before I relay it to my own students. So, does leaving cobwebs really carry as much merit as we think?

The concept of leaving cobwebs initially makes sense. Leaving them allows you see the areas to target. But brushing down cobwebs afterwards when they are wet is only going to smudge them. And of course, going back to remove them once they are dry is adding another visit and associated costs.

I will be the first to confess to being a bit of an old-school pestie at heart, and I often struggle with the concept of doing and using less. You know the type – doing external household pest treatments with a bulk tank and petrol pump, giving the roof space a good thorough dusting, and treating pretty much every cornice with the pneumatic sprayer. But in an attempt to keep up with the public’s desires, looking out for the health and wellbeing of my staff and clients, and hopefully setting an example for the rest of our industry, I find myself constantly trying new methods and going against what I was taught.

Going against how we were taught can be difficult, because we were often taught by people we held in the highest regard. And why change something when you know it works? I actually remember assessing a student 13 years ago and part of the assessment was for him to outline for me how he goes about performing spider treatments. He proceeded to proudly and confidently explain to me how he would go around the house and de-cobweb it all before spraying. I clearly remember chuckling away to myself thinking “Wow, that’s a bit of an overkill, why would you do that? No thanks, I’ll stick to the way I do it! You have to leave the webs so the spiders come out and pick up the insecticide off their webs!” But this was how he was taught. There was nothing dangerous about this method, so he still obviously passed. I thought I knew better, but perhaps his mentor knew better?

There is no doubt spraying ceiling cornices with a pneumatic sprayer is an effective method, but it also certainly has its downsides. It requires a skilful technique to avoid product running down the wall, and those that haven’t had the practice really struggle. Then there is the hazardous aspect. This was the big one for me, as spraying above head height greatly increases drift spray on the clients’ furnishings and pesticide exposure to the operator. I think we’ve all suffered the dreaded “pyrethroid burn” or paresthesia being the more appropriate medical term. Using aerosols to spot treat cornices is another common method that I find suitable for the occasional spider but when the cornices are full of spiders, that much aerosol in the air is never a good thing.

So, for a while now my staff have ditched spraying ceiling cornices and have been using cobweb brooms to brush down cornices instead as part of our general household pest treatment. And I have to admit it has far exceeded my expectations. So, let’s look at the ‘physics and logistics’ behind it.

Firstly, the physical dislodgement of spiders with the cobweb broom either knocks them to the floor where they have to crawl across the treated skirting/floor edge and/or are mortally injured. Spiders such as daddy long legs (Pholcidae), cupboard spiders (Steatoda sp.) and red house spiders (Nesticodes sp.) are relatively fragile and easily injured.

Secondly, for those spiders that aren’t instantly dislodged, removing a spider’s web encourages them to rebuild the web or move to another location. The more active a pest is, the more likely they are to come into contact with a treated surface – the more sedentary a pest is, the harder it is to treat. Spiders such as wall spiders (Oecobius sp.) and sac spiders (Clubionidae) construct a fine sheath layer that they hide beneath. This protective retreat often prohibits insecticides from reaching the resting spider. A cobweb broom easily removes this layer and the spider.

And finally, using a cobweb broom gives instant visual satisfaction. Most of what we do is considered an invisible service, so, the more visual results we can provide, the more value a client can see in our service. I’ve lost count of the number of “wow” responses from clients when they have seen us remove those unsightly webs, especially when we break out the big gotcha pole to reach those high cathedral ceilings.

I can’t see us doing a full de-cobweb of the entire outside of a house (for the time being) but I have been strongly encouraging my staff to extend their de-cobwebbing activity to those very obvious visual areas such as front entries and patio areas.

Swapping cornice spraying for brushing down with a cobweb broom hasn’t added any more time to our service and I can honestly say our service call rate has also improved. This change in procedure has proven to be a very successful one for us as our clients are happier, our staff are happier, and I certainly feel a lot more comfortable sending my techs out. Cobweb brooms may not be for every pest business, but I can confidently advocate for them and encourage everybody to at least give them a try. 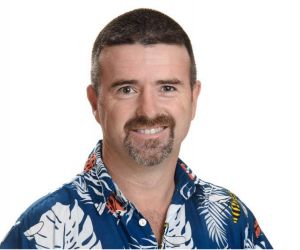