This edition of Active Insight delves deep into termite biology and answers a question posed by many pest managers.


I have often been asked, or had professional pest managers express concern, about whether subterranean termites might develop resistance to commonly applied soil termiticides and whether they should therefore rotate the active constituents they use. Physiological resistance in termites, sufficient to cause control failure, is generally considered to be most unlikely to occur due to the genetic inheritance characteristics of termites.

Subterranean termite colonies are usually formed by a monogamous pair of reproductive alates who mate following swarming flights. These flights are synchronised to species-specific times of the year and only on those days when the climatic conditions are appropriate. After the mating flight, the future kings and queens drop to the ground, shed their wings, and look for partners. Some species use a sex pheromone emitted by the female to assist. Having located a partner, the female leads a tandem search for a suitable nest site and they move underground to mate and reproduce. There is high mortality in this process and thus intense selection occurs during this colony foundation stage.

It is believed that both males and females show selectivity in this partner-finding process, given they mate for life and partake in intensive parental care. Larger body sizes and weight can be beneficial in partner selection since the first generation of nymphs is totally dependent on the fat reserves of the foundation pair, pending development of forager workers.

Genetic diversity and relatedness influence colony fitness. Coptotermes formosanus males have been shown to more likely pair with females showing higher levels of heterozygosity1 i.e. from a different colony. However, there is a surprising lack of evidence supporting kin discrimination during colony founding in subterranean termites, despite the growing studies of the negative effects of inbreeding in many plants and animals (including in subterranean termites).

One key mechanism that helps promote outbreeding in subterranean termites is the long-range dispersal of the alates, which reduces the likelihood that two nestmates will meet each other during pairing. Flight distances for Coptotermes species appear to be in the range of a kilometre.2 Statistically this means up to 90% of mating activity would be with non-nestmates.

After establishment, colony growth starts slowly with a typical population of Coptotermes spp. reaching 20-90 in number after one year. During this foundation stage, the colony is a simple family with the original monogamous reproductives and their direct offspring. With the death of the founding pair, apterous neotenics, or more commonly brachypterous neotenics, may take over to develop an extended family colony.

This is still a colony with the same genetics. Since relatively few colonies of subterranean termites survive the death of the founding pair, there may be an evolutionary cost associated with neotenic reproduction. Fusion of colonies to create a more genetically complex group of mixed families has not been demonstrated in the genus Coptotermes.

Some species of Australian termites, e.g. Schedorhinotermes spp., appear to reproduce by budding, whereby a portion of the colony splits off or becomes isolated from the primary nest and functions as an independent colony. Again, the genetics of the colony remain identical. This has not been seen in Coptotermes spp.

So, with termites we do not see the frequent and rapid passing on of genes from multiple generations that occurs in species such as houseflies and cockroaches, which have a far shorter lifecycle.

The effectiveness of termiticide-treated soils against subterranean termites very much depends on the soil properties, the toxicant chosen, the quantity of the toxicant applied and the response of the termites to the toxicant. Treatment failures are most likely due to differences in toxicity, repellence, speed of intoxication, and the vapour pressure characteristics of different termiticides.

Differences in termite susceptibility between colonies and within colonies to an individual toxicant were shown in a USDA study.4 In this study there were cases where a part of a termite population within a colony responded differently to a toxicant. There were also signiﬁcant differences in the tolerance ratios between workers of C. formosanus colonies to all toxicants tested except ﬁpronil. This suggests that possibly mutant traits were present, or a different phenotypic representation of the same genotype was expressed. The latter means there might be differences due to the age of the termite or how long it was since its last moult.

These differences raise questions over whether there are different rates of toxicant penetration, metabolic resistance, and target-site insensitivity. Development of more tolerant survivors of insecticide exposure into supplementary reproductive individuals (neotenics) theoretically could lead to more tolerant colonies. This is an unlikely scenario in reality and, as noted above, this appears to come with an evolutionary cost. With nonsocial insects, a number of generations must be completed to substantially increase gene frequency, making generation time critical to resistance development. The more frequently the generations are exposed, the more rapidly tolerance can develop.

With Rhinotermitinae, selection could in theory take place at any stage that can develop into a supplementary or primary reproductive. Development of secondary reproductives from less susceptible individuals could therefore increase gene frequency within a colony in a single generation; due to their high reproductive rate and because termite colonies are usually a closed system, such traits could be very stable within the colony. This would depend upon a less susceptible individuals in a colony being sufficiently developed (mutated) to tolerate a correctly applied dose of the termiticide, which in reality is most unlikely, especially since testing to establish use rates of termiticides is performed over a large number of genetically different colonies in a wide range of environments. This concept would also only provide colony-specific tolerance.

Rhinotermitinae harbour symbiotic microflora to assist with lignocellulose digestion. To develop a viable resistance strategy to a termiticide, the enzymatic detoxification mechanism could theoretically be accomplished by their gut flora secreting a disruptive enzyme. Even if this were possible, the mechanism is much more complicated to materialise in reality.

In conclusion, whilst we should not be complacent, resistance is most unlikely to play a role in termiticidal control failures. 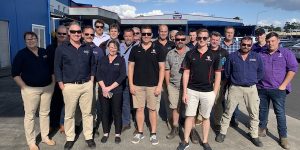