When it comes to detecting incursions of urban invasive pests, pest managers are on the front line. It pays to know the key notifiable pests in your state, so you can fulfill your professional responsibility and help with biosecurity.

When it comes to detecting incursions of urban invasive pests, pest managers are on the front line. Invasive pests generally make their incursions at airports and docks in imported goods, and will generally escape to a location nearby. Their presence in these urban areas will often be overlooked by the general public, but local pest managers with their knowledge of the local insects should be able to spot an exotic pest. Due to their invasive nature and potential to have a serious impact on the Australian environment, certain invaders are classified as notifiable pests.

Ants are amongst the most serious of invasive pests. The red imported fire ant (Solenopsis invicta) has a large incursion in south east Queensland and at the end of 2019 a small incursion was found in Fremantle, WA. Previously there have also been small incursions in Sydney. This is perhaps the key notifiable invasive ant species. However, the similar looking tropical fire ant (Solenopsis geminata), which is only established in the Northern Territory and the tiny, electric ant (Wasmannia auropunctata) which is currently under a control program in the Cairns area are also notifiable.

Small incursions of the browsing ant (Lepisiota frauenfeldi) have been detected in Perth, Brisbane and Darwin, with eradication programs underway. Perhaps less well known than the other invasive ants, the browsing ant can also form super-colonies with the subsequent detrimental effect on the environment. This 3-4 mm ant is not dissimilar to crazy ants in size, shape and movement, having long legs and antennae and running around in a somewhat random manner when disturbed, but has a uniform shiny dark brown colour.

Despite government control programs, eradication of the yellow crazy ant (Anoplolepsis gracilipes) in Queensland is no longer possible. However in other states, the yellow crazy ant is a notifiable pest.
The Argentine ant (Linepithema humile) and the African big-headed ant (Pheidole megacephala), two of the worst invasive ant species, are not notifiable pests as they are now widely established across Australia.

The West Indian drywood termite is considered one of the most damaging termite species globally. Typically existing as small nests and able to live off the moisture from the wood, there are frequent incursions along the east coast of Australia, as furniture and other wood material is brought in from overseas. Drywood termites produce pellet like frass and the soldiers have short thick dark heads, steeply sloping at the front. It can be difficult to separate the species, therefore if the telltale frass is spotted, state biosecurity should be contacted.

The khapra beetle (Trogoderma granarium) is a serious stored product pest. It is easily confused with many similar Trogoderma species in Australia, so if it is suspected, expert identification may well be required. Although pest managers involved in grain and stored product treatments should keep an eye out for this damaging pest, a recent appearance in refrigerator packaging in Good Guys stores in the ACT shows we all need to remain vigilant.

There are a number of native armyworms, but the fall armyworm (Spodoptera frugiperda) is an invasive pest that can create significant damage to a number of crops such as maize, rice, sorghum, sugarcane and wheat, as well as vegetables, fruit and cotton. It has recently been detected in the Torres Strait and far north Queensland.

The Mediterranean fruit fly (Ceratitis capitata) is one of the world’s most destructive agricultural pests. It will infest a wide range of fruit and vegetables and is particularly damaging to stone fruit, pome fruit, citrus and guava. Although there are other fruit flies in Australia, identification of the Mediterranean fruit fly is relatively easy, with its coloured markings and patterned wings. Currently it is only present in WA, with strict control on the movement of fruit across borders, to prevent further spread interstate.

Although not currently present in Australia, with its rapid expansion throughout Europe and the US, the brown marmorated stink bug (Halyomorpha halys) is a key focus of biosecurity screening. It is a major pest of crops, nursery stock and ornamentals, also causing a nuisance as it can shelter in large numbers during the colder months. Like native stink bugs, it releases a foul smelling odour when disturbed.

As professionals, pest managers have a duty of care to keep an eye out for the unusual. Keeping your entomological skills up to date is a must. Whether confident in your identification or even if in doubt, take a photo of the suspected notifiable pest, and if possible, collect a sample to send to the relevant state government department. 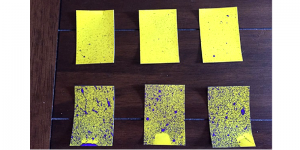 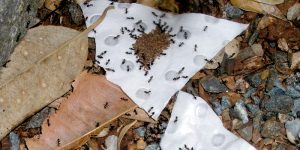