They closely resemble, and are closely related, to the notorious black widow and redback spiders. They’re commonly found inside houses, which gives rise to another of their common names, the cupboard spider.

Would you be able to recognise a false widow?

Description: They are small spiders just over 1 cm in length. Females have black legs and a large, oval, glossy, black or purplish brown abdomen with pale markings. There is also a paler form (see photo) with brown body and legs with light markings on the abdomen. Males have pale legs, a reddish-brown thorax and a much smaller grey abdomen with pale markings. Neither have the bright red markings of a redback Spider (Latrodectus hasselti) although the related Steatoda capensis, a South African species also introduced to Australia, may have a red spot at the tip of the abdomen.

Habitat:  May be found under bark or in leaf litter, but most frequently encountered inside houses, garages, or carports, where they build messy cobwebs in dark corners, under furniture and in cupboards (from which they get one of their common names). Males may be found wandering in search of a mate.

In an amusing bit of trivia, one of these spiders was painted red and blue to star in the 2002 Spiderman movie.

Pest status: False widows will only bite if threatened or injured, and are much more likely to flee if disturbed. However, the symptoms of a bite are similar if less severe than those a redback, and may include blistering, muscle spasms, pain, fever, sweating, and a general malaise lasting for several days. Redback antivene works well, in any case.

Treatment: False widows are vulnerable to general insecticides like the pyrethroids, which can be applied to the underside of furniture and other spaces with an ordinary backpack and wand. More care should be taken with treating the insides of cupboards and other furniture inside the house – cupboards and drawers should be emptied before spraying. The use of a vacuum cleaner is an option to remove visible spiders and webs.

CLEANING UP DURING THE PANDEMIC 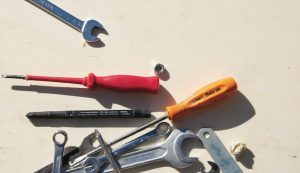