Highly destructive drywood termites are not a frequent call-out for pest managers but are a species worth being knowledgeable about.

Although not common, pest managers should know the tell-tale sign of a drywood termite infestation – their faecal pellets. The pellets have a distinctive appearance; an elongated oval shape with six concave surfaces and will often appear in piles on the ground under a hole in wood.

Drywood termites are not subterranean termites and do not require contact with the ground or a water source. However, since they gain their moisture from the wood, they live in warmer, more humid coastal areas. They form small colonies, which allows them to infest small furniture items and can therefore be easily transported between locations if the furniture is moved. When they infest structures, they do not form a large central colony but persist as many small colonies. Coupled with the difficulty in detecting their presence, this makes them very difficult to control.

As a result, Cryptotermes brevis, the West Indian drywood termite is considered the most destructive termite in the world. Although not common in Australia, it is a reportable pest (to your relevant state government department). There have been a number of infestations in various locations, from Canberra to Rockhampton on the east coast, and is considered as established in Brisbane, Maryborough and Rockhampton.

The soldiers of drywood termites are very distinctive, their heads having a plug-like shape and being dark and deeply wrinkled. However, there are a number of other drywood termites, both native and introduced, and it can be difficult to separate the species. If you have identified drywood termite frass, try and capture a soldier that can be sent off for identification. 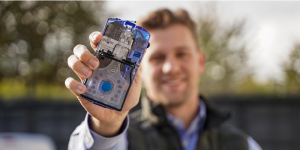