A spray insecticide such as Bithor from Ensystex is an effective tool for creating a mosquito protection zone in areas of high mosquito pressure.

Mosquitoes are a problem pest of growing importance. Gone are the days when the biggest concern was the annoying bites around the backyard BBQ. People are more aware than ever of the risks of mosquito-borne diseases such as dengue, Ross River virus, Australian encephalitis, Barmah Forest virus, Zika virus and malaria, though the latter two are not currently present in Australia.

Whilst there are more than 300 different species of mosquito in Australia, only a small number are of major concern. The creation of a residual mosquito protection zone is a well-established methodology for protecting against pest mosquitoes and mosquito-borne diseases. This type of treatment is widely used in government-sponsored mosquito abatement programs and in WHO mosquito reduction programs.

This technique can also be exploited by professional pest managers to safely and effectively develop mosquito protection zones around residential properties, entertaining and dining areas, backyards, parks and outdoor recreational spaces. This is a tremendous growth opportunity for the pest industry in Australia, given the increasing concerns surrounding mosquito-borne diseases, warming temperatures leading to increased mosquito numbers and a growing population at threat. Commercial enterprises that rely on patrons being outside can gain huge benefits from providing an environment that is free of mosquitoes.

“Guests ­at hotels and resorts throughout Southeast Asia, and increasingly in Australia, are protected by mosquito protection zones created by Bithor Dual Action Insecticide,” advised Steve Broadbent, regional director for Ensystex. “Whilst mosquito larvae mature in water, the biting and blood-sucking adults are largely crepuscular, meaning we see them mostly at dawn and dusk. During the day they rest in vegetation and shade on walls, underneath eaves, subfloors, etc.

“When Bithor Dual Action Insecticide is professionally applied to these daytime resting places it can provide greater than a 90% reduction in mosquito and other biting insect numbers, e.g. biting midges. The Bithor-treated zone is not repellent to adult mosquitoes, so they rest undisturbed on the treated surfaces, ensuring greater uptake of the active ingredients.”

Mr Broadbent added, “Bifenthrin is widely used around the world in mosquito control programs to provide long-lasting control. Numerous Ensystex trials in Australia, Asia and Africa have shown that a single Bithor Dual Action treatment works continuously for up to eight weeks, regardless of rain showers and blazing summer heat.” The product was also developed to be low-irritant and low-allergenic to people and pets.

Bithor Dual Action was developed to kill pests, including pyrethroid-resistant strains. “This gives it a big edge,” explained Mr Broadbent. “This is due to the fact that Ensystex has blended two residual insecticides, each with a totally different mode of action, from two different chemical groups. Bifenthrin is a Resistance Group 3A pyrethroid, and imidacloprid is a Group 4A neotenic.”

The enhanced potency of Bithor Dual Action arises from the ‘potentiation’ that occurs between these two actives. Potentiation means the combined effect of each active (bifenthrin and imidacloprid) is greater than the sum of the effects of each active alone. Bifenthrin attacks the sodium channels along the nerve fibre, so it operates as an axonic toxin; meanwhile imidacloprid strikes at the acetyl choline receptors at the nerve synapse, so it is a synaptic toxin. Since the actives are working simultaneously at different target sites on the insect nervous system, the end result is exceptional control of insect pests.

Bithor provides quick kill and long-lasting residual performance, with the added benefit that technicians don’t feel the tingling so typical of cyano-pyrethroid products such as beta-cyfluthrin, deltamethrin, cyhalothrin, and cypermethrin. 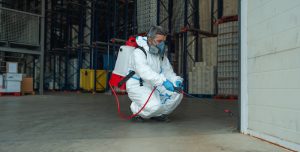