With over 800 species in Australia alone, these insects are often found inside houses and are a favourite with children. Would you be able to identify a click beetle?

Description: Click beetles may range from small rounded species a few millimeters long, to over 5 cm long, but the most common species are long, narrow, brown beetles around 2 cm long or less. Some species are more colourful, with orange and black markings to mimic Lycid beetles. The antennae are usually head tucked under the body, and are long and simple, but on some species they may be branched like a feather.

They possess a pair of distinctive rear-pointing spikes at the corner of the thorax, and all Elateridae possess a spike and a corresponding notch on on the underside of the thorax. This is the clicking mechanism, which the beetles use to escape predators or if they are trapped on their backs unable to turn over. The beetles will flex their body until the spike snaps into the notch with a loud click, strong enough to bounce the beetle high into the air.

Larval click beetles are known as wireworms, and are hard-bodied worm-like insects with three pairs of short legs.

A few species are bioluminescent, both as adults and as larvae.

Habitat: Click beetles are found in most habitats, and in most species the adults are nocturnal herbivores. The larvae are usually subterranean, and most eat decaying plant matter although some are crop pests, with a few species being carnivoress. The larvae may take up to four years to reach adulthood.

Pest status:  Adult click beetles are attracted to lights at night, and may seek out moist areas inside homes. The clicking of an adult beetle may disturb sleep, but the beetles may be safely handled and are quite entertaining to children. Wireworms may be pests of potatoes, melons, and the roots of other crops.

Treatment: Adult beetles may be discouraged from entering houses by switching lights off at night. Wireworms are unlikely to be a serious pest in a garden, and have a remarkable ability to recover from some insecticides, but have been controlled with persistent insecticide granules in the soil, crop rotation, heavy tilling, nematodes as biological control, and other methods. 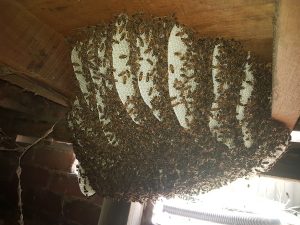 TO BEE OR NOT TO BEE, THAT IS THE QUESTION 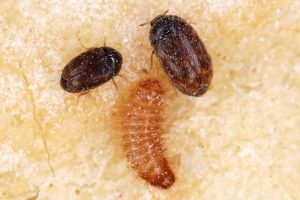