Cunning hunters with bulging eyes, a venomous beak, and a hunger for the flesh and fluids of other insects – and sometimes human blood. Would you be able to identify an Assassin Bug?

Description: A diverse family, ranging from so slender that their legs resemble thread, to more robust species up to 3cm long. Larger species tend to have a wide body and thorax, and wings narrower than the abdomen. The head of most species is long and narrow, with bulging eyes on the sides, and a prominent beak (rostrum) folded back underneath. Antennae are often long with a nearly right-angled joint nearer the head. Some species advertise their painful bite with black and red coloration or have spikes and knobs over their thorax.

Habitat: Assassin bugs stalk their food (usually soft-bodied insects) and often strike from behind, impaling the prey with the beak and injecting flesh-dissolving enzymes, and suck the resulting soup back up through the beak. Some species wait near flowers and capture visiting honeybees and other pollinators. Thread-legged species hunt spiders, strumming the web to deceive the inhabitant until they come within reach.

Pest status: Generally considered a beneficial species in the garden, as they prey on caterpillars and other pests. But if roughly handled, Assassin Bugs can easily puncture human skin, and inject the same flesh-dissolving enzymes they use on their prey. These bites are exceedingly painful and may leave a lump that lasts several days.

One subfamily of assassin bugs feed on vertebrate blood, and some spread the debilitating and sometimes fatal chagas disease. But these ‘kissing bugs’ do not occur in Australia, and the species found here are minor pests at best.

Treatment: Chemical insecticides are not considered effective, since the entire garden would need to be treated to kill any ground-dwelling or foliage-inhabiting species. Clients should be taught to recognise the assassin bug’s distinctive appearance, avoid handling them, and wear gloves while gardening. 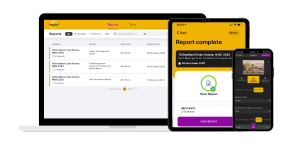